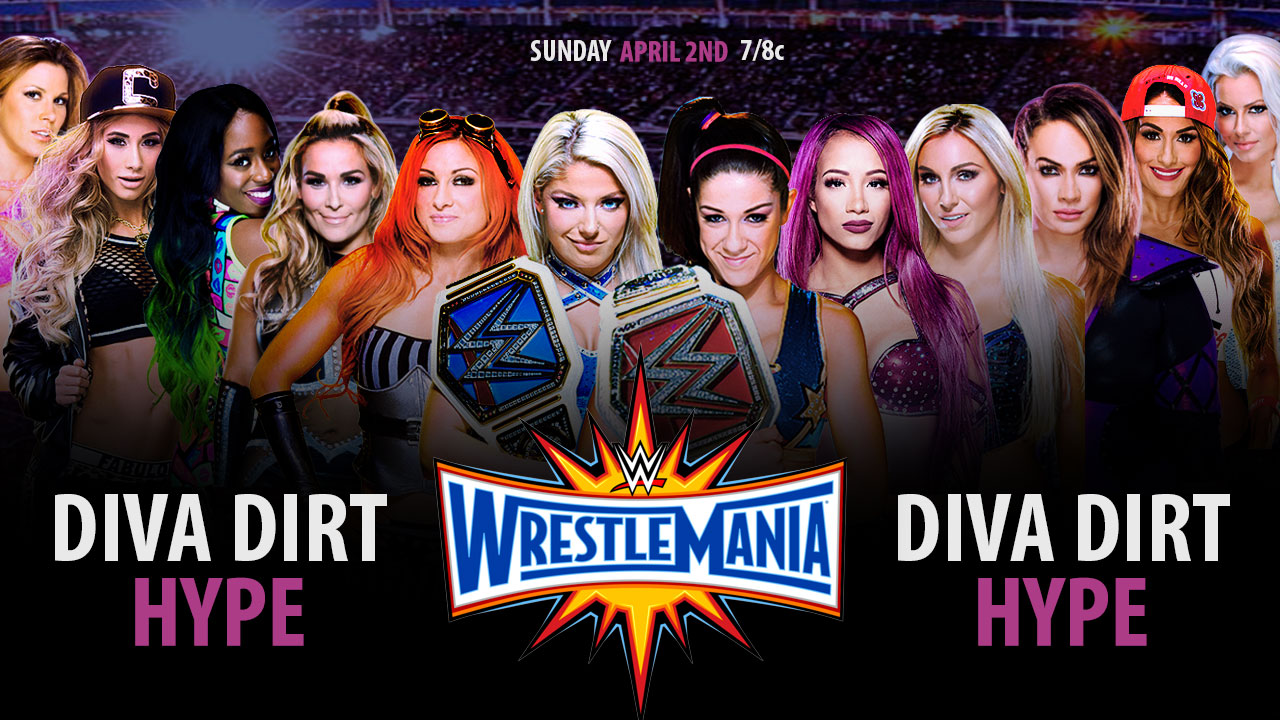 Diva Dirt Hype is back!

Get hyped for WrestleMania 33 with Diva Dirt Hype, highlighting the 6-Pack match for the SmackDown Women’s Title, 4-Way Elimination for the RAW Women’s Title and the Mixed Tag.

Check out the Diva Dirt Hype clip below:

Music: “Everybody Wants to Rule the World” by Lorde

Bayley’s run as Raw Women’s Champion has been a dream come true, but she’ll have to deny her best friend, her most ardent foe and an unstoppable force at WrestleMania to prevent a rude awakening.

The beloved Raw Women’s Champion will defend her title against Sasha Banks, Charlotte Flair, and Nia Jax in a Fatal 4-Way Match at WrestleMania 33 that began to take shape as far back as December. That’s when Charlotte wrestled the title from Banks in a grueling WWE Iron Man Match, sending The Boss into a minor tailspin while Bayley rose up as The Queen’s most prominent foe in the process.

Even though Charlotte fended Bayley off at the Royal Rumble, a recovered Banks provided her friend with a decisive assist on Raw to dethrone The Queen — and then another at WWE Fastlane, snapping Charlotte’s pay-per-view streak and all but assuring Bayley will walk into her first Showcase of the Immortals as Raw Women’s Champion.

Thanks to Raw Commissioner Stephanie McMahon coming down on Charlotte’s side that Sasha’s interference cost Flair the Fastlane match, The Queen was able to wheel and deal her way to the big dance. Banks joined the field at the end of an impromptu friendly against Bayley that booked her passage to Orlando, and Jax followed suit two weeks later by defeating Bayley in a non-title contest to earn her place in the match. The next week, a pre-Raw announcement complicated things further, transforming the bout into a Fatal 4-Way Elimination Match and rendering Bayley’s grip on her title in more danger than ever.

In a sense, perhaps it was always fated to be this way: The four most dominant figures of Raw’s Women’s division — the beloved champion, the dominant Queen, the rebounding Boss and the near-unstoppable Jax — finally clashing in an every-woman-for-herself battle. At the center of it all is Bayley, the dreamer who finally reached the mountaintop. But tonight, streaming live at 7 ET/4 PT on WWE Network, we will see what happens when dreams and ambition collide.

SmackDown Women’s Champion Alexa Bliss is in for the title defense of her life tomorrow at WrestleMania.

WWE’s Wicked Witch will face Becky Lynch, Natalya, Mickie James, Carmella and, now, Naomi. The gigantic title bout came together after General Manager Daniel Bryan, in an effort to demonstrate that Team Blue is WWE’s true land of opportunity, ruled that any woman on the SmackDown LIVE roster who is available to compete would be eligible to vie for the division’s crown.

Naomi, who forfeited the SmackDown Women’s Title as a result of an injury, became the latest competitor added to the match when she returned by surprise on the March 28 edition of SmackDown LIVE. Now that she’s back in action and determined to regain the title, will Naomi make the rest of her opponents “feel the glow” tonight in her hometown of Orlando?

Even though this probably isn’t the WrestleMania dance card she hoped for, the fiery champion won’t fall easily. Bliss’ hair-trigger temper would prompt a charging bull to change course, and with her back against the wall, it’s frightening to think what she could resort to as she stares down the challenge of almost the entire Women’s division.

So, when John Cena & Nikki Bella square off against The Miz & Maryse at WrestleMania 33, we will not only be seeing two couples of this variety collide, but also witnessing a knockdown, drag-out, awesome (no pun) melee with a ton of personal pride on the line for both sides, as they attempt to find out who SmackDown LIVE’s “it” couple truly is.

For years, Cena & Nikki did not acknowledge their relationship within WWE arenas. Total Divas or Total Bellas was one thing, SmackDown LIVE was another. However, after two-time Divas Champion Maryse brutally assaulted Nikki with a lead pipe, and Miz and Cena eliminated each other from the WWE Championship No. 1 Contender’s Battle Royal, the rules suddenly changed.

With these two conflicts merging, all four Superstars began to rip one another to shreds on the microphone. The Cenation Leader was a guest on “Miz TV” — the perfect time and place to badmouth The A-Lister. Miz followed with an appearance on Talking Smack, which proved to be an excellent opportunity for him to tell the WWE Universe why he believed Cena is a “robot” whose relationship is manufactured for the benefit of reality TV cameras. Fearless Nikki told Maryse to keep her hands off her man; Maryse retorted by calling Nikki Bella a fraud.

In between the smack-talk and these tumultuous physical exchanges, a massive WrestleMania match has been made. Can Cena & Nikki shut up Miz & Maryse once and for all? Or, will The Miz repeat his performance from WrestleMania XXVII, where he retained the WWE Championship over Cena, and push him and his bride to victory?

Wrestlemania 33 airs tonight, Sunday April 2nd at 7 ET/4PT on the WWE Network, with the pre-show beginning at 5 ET/3PT!

Who do you want to win each match? What are you most excited to see? Let us know your views in the comments below!