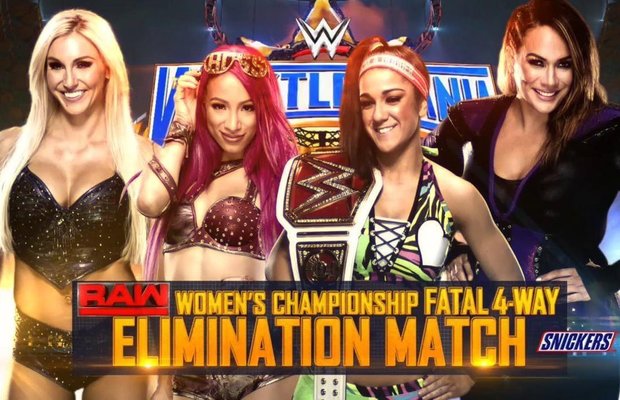 Tonight at WrestleMania 33, Bayley defends her Women’s Title in a Fatal 4 Way Elimination match against Charlotte Flair, Nia Jax and Sasha Banks. Which Superstar will be the last one standing and leave WrestleMania as champion? The Diva Dirt team weighs in:

Abir: This match is an Elimination one for a reason. And that’s to get rid of Nia Jax so that the original match can take place. No hate intended for Jax, but it’s pretty clear that she’s in this match just so it doesn’t look like a replica of Charlotte and Sasha’s Triple Threat with Becky Lynch from last year. But anyway, after 3/4 of the Horsewomen team to get rid of the toughest opponent, the besties will work together to get Charlotte out. However, the Queen will cheat her way into eliminating Sasha and enforce HEEL MODE. Banks will become frustrated that her plan on being nice didn’t work, and will then take her frustration out on Bayley as she no longer needs to hide her feelings. Charlotte will then take advantage of this and take home her 5th Women’s title reign and therefore become a 6x champion on the main roster. 10 more to go….

Alex: This one is probably the toughest call, but I think Bayley is walking out as Champion! Let’s just remember that last year, she missed out on taking part in one of the best matches of all time. I think the WWE are going to give her her moment and our Hugger and the Bayley buddies will be flying high!

Josue: If rumors of Sasha turning on Bayley after WrestleMania are true, then I’m predicting that Bayley will retain here. In order to “prove” she is a worthy champion, I can see Bayley eliminating her friend Sasha with a roll-up after either Charlotte or Nia are eliminated. That will be the trigger that leads to the return of the heel Boss persona from Sasha on the following night of Raw.

Kyle: The program for this has been the most underwhelming of all the matches this weekend, unfortunately. I think these women will go to war but when the dust settles, I think Nia Jax will leave with the title.

Matthew: If Bayley pulls off the biggest win on the Grandest Stage Of Them All, it would be big.

Stephanie: It’s unfortunate that I’m not as invested in this as I should be. Raw continues to be all about the 3HW and friends. I think WWE also missed the mark on not including Dana Brooke here. However, I expect this match to live up to the expectations Charlotte, Sasha, and Bayley have already set for us previously. Charlotte should get eliminated via some distraction, maybe Dana? Then the match will eventually come down to Bayley vs Sasha where their friendship should finally explode. I expect Bayley to dig deep and retain, starting her feud with a reinvigorated Boss.

BREAKDOWN: 5 for Bayley, 1 for Charlotte Flair. 1 for Nia Jax, 0 for Sasha Banks.