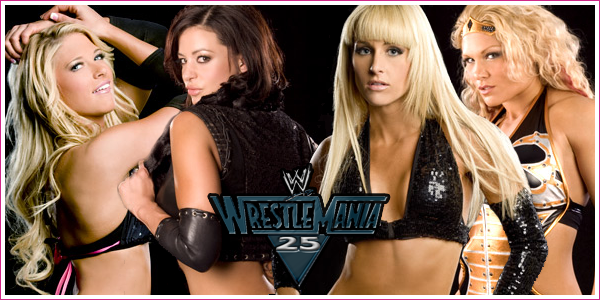 While WrestleManiaâ€™s 25 Diva battle royal might be a dream come true for some Diva fans, its a train wreck waiting to happen for most. What happened to the good olâ€™, one-on-one matchups. Well for the next few weeks leadingÂ up to WrestleMania,Â Diva Dirt will beÂ  bringing you theÂ  Wrestlemania dream matches that we wish would happen or might even happen in the future. Welcome toÂ WrestleMania Fantasy Face-Off!

Match 4: Kelly Kelly and Candice vs Beth Phoenix and Michelle McCool in a BunnyMania Lumberjill Match

It’s January and we all know what that means in WWE. Playboy time! Michael Cole and The King announce that Kelly Kelly will be making an announcement tonight. Kelly comes to the ring, mic in tow. She tells the crowd that she’s proud to be the next WWE Diva to pose for Playboy. Predictably the crowd erupts into cat-calls. Before Kelly can say anything more she’s interrupted by Beth Phoenix. Phoenix says she’s sick and tired of Divas like Kelly giving the WWE a bad name by taking their clothes off.

Kelly gets upset and gets in The Glamazon’s face. Beth sneers and pushes Kelly to the mat. Hard. Kelly tries to get up and attack Beth but is no match for the powerful Phoenix. Just as Phoenix starts beating the tar out of K2, Candice Michelle‘s music hits. Candice hits the ring and Beth gets out of dodge. However, while the raven-haired Playboy Playmate is checking on her friend, the Glamazon re-enters the ring and levels Candice with the Glam Slam.

Two weeks later, Candice and Kelly have a tag team match against Beth and a surprise partner. The faces makeÂ their way to the the ring, and wait for their challengers. Beth’s music hit and she comes out with a mic. She says she found a partnerÂ who shares herÂ ideals and who is willing to defend the integrity of women’s wrestling. She ends her tiradeÂ by welcoming Raw’s newest Diva, Michelle McCool.

Kelly picks up the surprise win by pinning McCool. During the post-match celebration Beth and Michelle go on the attack, leaving the Bunnies laid out in the ring. The heels leave the ring satisfied.

For the next few weeks, KellyÂ is terrorized by Beth andÂ MichelleÂ backstage and in the ring, culminating withÂ Phoenix and McCoolÂ interrupting Kelly’sÂ cover unveiling. The heels attackÂ Kelly, prompting Mickie James, The Bellas, AliciaÂ Fox, Eve, Maria and Candice to come to her aid.Â TheÂ Divas clear the ring and Beth and Michelle start to retreat.Â ThenÂ the heelÂ Divas come down the ramp. Katie Lea,Â  Jillian,Â Layla,Â Natalya and Maryse run to the ring and a brawl breaks out.Â  As the Divas go at it, Vince’s music hits. He announces that Kelly and Candice will take onÂ Beth and Michelle in a BunnyMania LumberJill Match. However, there are a few conditons. If Beth and Michelle win, Kelly win be the last WWE Diva to pose for Playboy, but if Kelly and CandiceÂ win Beth and Michelle have toÂ poseÂ nextÂ month. Beth and Michelle look positively mortified, but they accept.

All theÂ Lumberjills comeÂ to the ring, inexplicably dressed inÂ cocktail dresses and really high heels. Kelly’s music hits and she and Candice come from behind the curtain.Â They stop at the end of the ramp and point backÂ to the entrance. Former Playboy Playmates Torrie Wilson, Sable and Chyna, come out to ringside to support theÂ faces.Â The crowd goes nuts. Next out, Beth andÂ McCool. The crowd gives them major heat when Beth spits at Chyna. Torrie and Sable have to hold Chyna back.

The match start off with Kelly and Michelle. The heels make frequent tags, keeping Kelly grounded. Kelly and Michelle knock heads and both start crawling to their respective cornersÂ  for a tag. They reach their partners and Candice comes in fighting,Â taking Phoenix ofÂ her feet withÂ a few clotheslinesÂ and a dropkick. Candice goes for the pin, kickout at two. CandiceÂ goes for Beth, who is retreating towards the ropes.Â Beth uses leverage to throw Candice out of the ring. The heels jump on her immediately and the faceÂ Divas come to the rescue. A fight breaks out on the outside(of course). Bad weaves and hooker heels go a’flying. Finally, Candice and Beth make it back in the ring. Candice hits the ropes but is tripped up by Jillian. Candice goes after her and Beth uses the distraction to execute her Glam Slam. 1.2.3. Playboy is abolished from the WWE.

After the match, Beth and Michelle get in the formerÂ Playmates faces. Chyna levels Beth with a Clothesline followed by a bodyslam on theandÂ Michelle retreats, saving her own skin. Kelly and Candice celebrate in the ring with Chyna, Torrie, Sable and the other face DivasÂ despite thier loss.Â The heels go to the back, supporting a veryÂ sore Beth Phoenix.