WrestleMania Lowdown: All You Need To Know About This Year’s Event 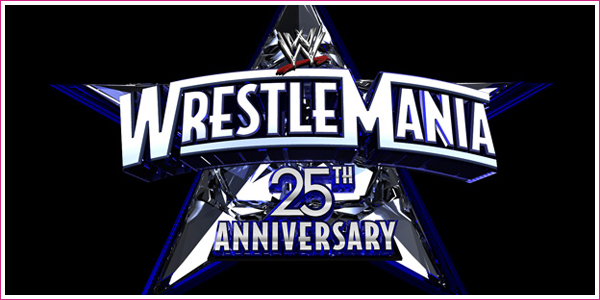 Welcome to Diva Dirt‘s WrestleMania Lowdown! The ultimate fact (and opinion) file on this year’s WrestleMania. The 25th anniversary of WrestleMania falls on April 5th this year and has already signed on some blockbuster matches including Triple H vs Randy Orton and Undertaker vs Shawn Michaels.

The History
Though nothing has been officially announced, as of last night’s Raw, we can safely assume that we’ll be seeing a Champion vs Champion bout between Raw’s Women’s Champ, Melina and SmackDown’s Divas Champ, Maryse.

Again, though this hasn’t been announced yet, it’s a fair assumption.

Awards Season
Every year, there’s some anticipation as to which Divas will get on the WrestleMania card. Unfortunately for our girls, they only get one match on the four hour pay per view compared to the 8-9 men’s matches. There are top names that are always bound to be left off.

The process reminds me of the recently-ended awards season, when we see several surprise nominees and some shocking snubs. Film favourites such as Cate Blanchett and Leonardo DiCaprio found themselves nowhere to be seen on the awards shortlists, while most thought it would be highly unexpected for Angelina Jolie to get an Oscar nomination this year and she managed it.

The rush to ‘Mania is similar to that, but now the dust has settled, we know who we will be seeing at the big event next month and who we won’t be seeing. No doubt the next week or so will see lots of ranting and raving on Diva message boards and such…

The Winners
The two winners of this year’s ‘awards season’ are the two respective champions, Maryse and Melina. One would think it would be a hard decision every year in deciding who gets on the show because of the limited spaces for the Divas, however in years past we have seen Maria, Ashley and Christy Hemme all feature prominently.

This year seems to have been a much easier selection process as SmackDown introduced it’s Divas Championship last year, leading to a Raw vs SmackDown contest. Let’s look at the two champions and almost-certain rivals for ‘Mania 25:

Starting with Maryse, a Diva I put in the ‘Angelina Jolie surprise nomination’ category. While Jolie picked up a few nominations for Changeling, she wasn’t by any means a definite nominee for the Oscar. Similarly, no doubt as Divas Champion, Maryse’s name has been thrown about for a ‘Mania appearance but there was no telling if WWE would pull the trigger.

Though she is SmackDown’s reigning queen, all signs have pointed to her predecessor, Michelle McCool making the card. Some have cited her backstage political alignment which certainly must help, but there’s no denying McCool has had one hell of a year also making her almost a shoe-in for a spot on the big stage.

Maryse’s career really has come full circle heading into this WrestleMania. It was post-Mania last year, that her career began to take off and ultimately afforded her the chance to become the Divas Champ and now she heads into this year’s event with the belt and with a newfound fame. For a Diva that wasn’t even on the radar heading into WrestleMania 24, this has to be a Britney-esque success story for the French poodle. The Diva proved to be surprisingly well rounded in the ring and her feisty persona has put her over with the fans as well.

Maryse will compete at her first ever WrestleMania, interestingly before her fellow SmackDown star and a woman who seems to have more political clout, Michelle McCool. Maryse also takes to the big stage before another Diva who has been given an almighty rub in the last year, Kelly Kelly.

It very much seems that Maryse’s WrestleMania payday was almost by proxy, as she is the Divas Champion. Had she not been, I think I’d be writing a very different blog without a mention of the Sexiest of the Sexy. As it stands though, Maryse is heading to the grandest stage of them all and she is taking her unique arrogance with her.

Meanwhile for her opponent, Raw Diva and Women’s Champion Melina, here is a Diva that always seems to be in the right place at the right time. Sensationally, Melina will be competing in her third WrestleMania this year and not only that, but her third consecutive WrestleMania – a feat that is unparalleled among the Divas. While the legendary seven time Women’s Champion, Trish Stratus has ultimately competed at the most WrestleManias of all the Divas – at four matches, those were in non-consecutive years.

With WrestleMania 25, Melina will rank behind Stratus with the second highest amount of ‘Mania matches among the Divas. Melina has beaten out the likes of Alumni, Victoria and Lita who have only competed at one ‘Mania, the same number as the A-List Diva’s contemporaries, Mickie James and Beth Phoenix.

Whether you draw it down to luck or a vote of confidence in Melina, the Diva has made WrestleMania history for the Divas of WWE and unlike fellow record-breaker, Trish Stratus, joins an elite club of Divas who are undefeated at WrestleMania. The current pack-leader is Sable, the former Women’s Champion has won all of her three ‘Mania matches. Melina is a joint second with Torrie Wilson, both have won their two matches at the event. However if Melina can beat Maryse this year, she will be joint number one with Sable.

Unlike her opponent, Melina is obviously no stranger to WrestleMania and seems to be a firm favourite in WWE’s eyes when it comes to picking a Diva to compete at ‘Mania and this year it helps that she is the Women’s Champion.

After the cut, the ladies who lost out on ‘Mania plus we look at the match potential of Maryse vs Melina:

The Losers
While only a select few can be winners, many will lose out. This year the standout snubs are that of Beth Phoenix and Michelle McCool. Both Divas have had sensational years on their respective brands but have fallen at the final hurdle that is WrestleMania.

Phoenix’s loss to Melina at the Royal Rumble signalled the end of her push, as many doubted that the feud could be sustained in the three months between that pay per view and WrestleMania for a rematch. And they were right. Unfortunately for Beth, the feud between her and Melina fizzled out some weeks ago and WWE is now putting together a makeshift Maryse-Melina feud.

The Glamazon has had a stranglehold over the Raw women’s division for nearly two years now. It started at SummerSlam 2007 when the Diva became the #1 Contender for the Women’s Championship. Her first title reign began in October 2007 and took her all the way through and past last year’s WrestleMania. In a move that baffled many, WrestleMania 24 was the first ‘Mania in some years that the Women’s Championship hadn’t been defended at the event, a trend that will likely continue this year.

Instead of defending her gold, Phoenix detoured into a feud with last year’s Playboy covergirl, Maria and Ashley, teaming with her now rival, Melina. Shortly after ‘Mania, Beth lost her title to Mickie James but remained prominent on television without the gold and began her feud with Melina until the A-Lister was injured in June. Recapturing the title from James at SummerSlam, Beth had another solid reign as champion for the next 6 months until the Royal Rumble. Her two title reigns span more combined days than Mickie James and Lita’s four reigns each. Beth held the title for 351 days while James held the title for 345 and Lita, 160.

For Michelle McCool, her star, like Maryse’s began to rise more prominently following WrestleMania 24. The Diva had a standout year by becoming the top Diva of SmackDown and the brand’s first ever Divas Champion. Her in-ring work improved ten-fold and McCool catapulted to the top of the Divas roster with the likes of Phoenix, James and Melina. Her feuds with Natalya, Maryse and Maria were feature attractions on SmackDown.

More recently, Michelle’s heel turn resulted in a title loss to Maryse. Given her political standing, many assumed that she would be able to get on the ‘Mania card but that doesn’t seem likely now. Had she held onto the Divas Championship or regained the title before last night’s Raw, she could have been in with a chance.

Others that lost out on an appearance are Mickie James, the most popular Diva in WWE has not competed at WrestleMania since winning her first Women’s Championship from Trish Stratus at the 22nd event. James has had considerable pushes and three more title reigns since then, however she never seems to be prominently pushed around the time of WrestleMania, thus is passed over for Divas that are in the spotlight at the time.

The ever-improving Kelly Kelly was a much-buzzed about option for WrestleMania, the Diva was considered to be a lock for ‘Mania if she posed in Playboy. That deal between the lad’s mag and WWE now seems to be done as a result of the company’s new PG rating. At the tender age of 22, there are plenty more ‘Manias for K2.

No matter how you spin it folks, someone is always going to get snubbed from WrestleMania. It’s too unlikely to assume that all the top Divas will be able to get a spot. It’s just the way it is. For Phoenix, McCool, James and Kelly, there’s always next year…

The Match Potential
The two Divas we’ll be seeing in action at ‘Mania have never faced each other before but the potential for this match, I would say is very high. For the first time in many years, we have two Divas that are actually competent in the ring. Say what you will about Maryse, though she’s not the best wrestler on the roster, she is far more evolved than Divas we have seen at past ‘Manias including Maria, Ashley and Christy Hemme. Meanwhile, Melina is one of WWE’s more seasoned Divas. Not to mention, she has looked even better in the ring since returning from her injury last November.

It’s not my ideal match situation, but I have higher hopes for this match and I can safely say, I am more confident for this match than I have been in some years. I feel confident that these two Divas can put on a great match, they are both extremely talented. While Melina is more experienced than Maryse, the ability level isn’t as steep as it has been in past years (i.e. Trish to Christy).

And don’t forget to factor in the showmanship and charisma that both of these Divas exude. Melina is one the most innovative and fiery Divas we’ve ever seen in the WWE, the way she uses the ring is unlike any other Diva. While Maryse has a cocky arrogance in her ring presence that should counteract Melina nicely.

All in all, sure it isn’t Beth Phoenix vs Melina, but I wouldn’t rule this one out. People will always bitch and complain, but I, for one, am grateful that we have a match of a higher caliber than in previous years because this could have gone all very horribly long (i.e. Maria or Eve vs Maryse). Bring on WrestleMania!