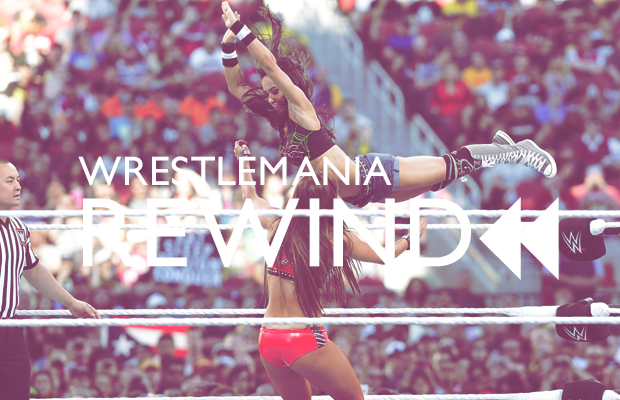 All week leading up to WrestleMania 32, we’re revisiting the most memorable women’s wrestling moments in WrestleMania’s 32 year history, tackling a total of 26 WrestleManias.

At the thirty-first WrestleMania, the #GiveDivasAChance movement brought forth a Mania match that saw two very different Diva duos lobby for a “chance” to show that they were what the division needed. The “Freaks & Geeks” team of AJ Lee and Paige faced off with the dominant duo of Brie and Nikki Bella.

Nikki was well on her way to becoming the longest-reigning Divas Champion, but her title wasn’t on the line here. Instead, she and Brie worked to prove that they were more than “cookie cutter” Diva prototypes. Meanwhile, “frenemies” AJ and Paige were all about breaking the mold permanently. In the end, the “friend” side of the equation won out for AJ and Paige, who picked up the win thanks to AJ’s Black Widow submission.

This would be AJ’s penultimate match as a Diva, her final match taking place the following night on Raw. She came out on top there as well, exiting the WWE on a victorious note.

What are your memories of this moment?