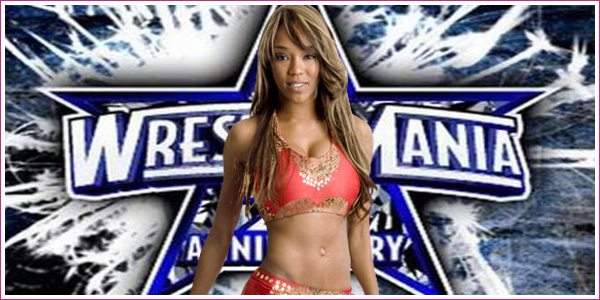 With the Divas Battle Royal at WrestleMania 25 quickly approaching, Diva Dirt has decided to take a closer look at each of the known and rumored participants in the matchup and assess their odds of winning as being High, Moderate, or Low. The winner, of course, will be crowned the first ever â€œMiss WrestleMania.â€ This is a new feature that will take place right up until the big day in Houston, TX on April 5th, 2009 and will be covered by yours truly, the â€œMouth of the South,â€ Hassan! I will save my prediction for the winner as the very last WrestleMania Spotlight profile I do. Be sure to leave your opinion in the comments! Letâ€™s get right into itâ€¦ dancing her way up next is ECW Diva Alicia Fox!

Though she’s been in developmental training since July 1, 2006, Alicia Fox didn’t enter a WWE ring until January 6, 2009 when she lost to Katie Lea on ECW. Despite losing, Alicia put on an amazing show for it being her first match. She sent the WWE Universe in a frenzy when she demonstrated she could very easily beat the likes of Maria, who is pushed far more than she probably deserves.

Coming from the same modeling agency as Kelly Kelly, KindIndustries.com, Alicia Fox has also come from zero wrestling history to being a consistent performer in the ring. When OVW and WWE severed ties, Alicia was sent over to FCW, where she is a fan favorite and continues to impress wrestling fans. She made it to the finals of the Queen of FCW Tournament, where she put on a match with Angela Fong that rivals some of the matches seen on Raw or SmackDown.

To sum it up, impressive would be an understatement when describing Alicia’s progress in the ring. So far on ECW, Alicia has defeated Katie Lea in tag team action, but hasn’t been in the ring since her loss to Natalya, where she showed that she is ready to go head to head with even the most veteran and skilled of Divas, like Natalya. She may have lost the match, but we were all winners; Alicia is definitely an up and coming star and destined to hold Championship gold in the future.

Despite this, I think Alicia is too new of a Diva to win the Battle Royal. Besides, she is not involved in any serious storyline at the moment other than being DJ Gabriel’s valet to the ring. If only she would have some kind of a run-in with Vickie Guerrero, I’m sure it would spark some kind of interesting storyline. After all, Alicia was Vickie’s wedding planner when she initially came on SmackDown back in June of 2008. Alicia even played a pivotol role in the Great American Bash main event, where she tried to help Edge and had Vickie Guerrero speared.

Until she gets some kind of character development other than waltzing down to the ring, Alicia Fox will probably not be put over the likes of other Divas, though expect her to really showcase her talent and probably eliminate a Diva or two!

Alicia Fox’s Odds of Winning On The Hassan-O-Meter: Low