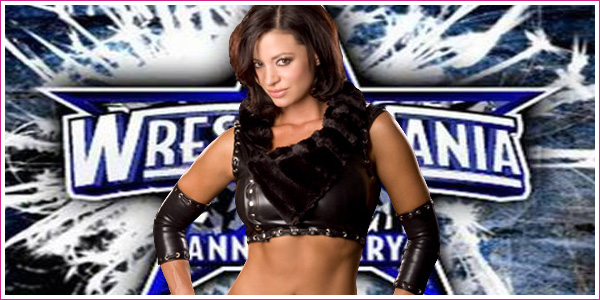 With the Divas Battle Royal at WrestleMania 25 quickly approaching, Diva Dirt has decided to take a closer look at each of the known and rumored participants in the matchup and assess their odds of winning as being High, Moderate, or Low. The winner, of course, will be crowned the first ever â€œMiss WrestleMania.â€ This is a new feature that will take place right up until the big day in Houston, TX on April 5th, 2009 and will be covered by yours truly, the â€œMouth of the South,â€ Hassan! I will save my prediction for the winner as the very last WrestleMania Spotlight profile I do. Be sure to leave your opinion in the comments! Letâ€™s get right into itâ€¦ give it up for Raw Diva Candice Michelle!

Though her status in the Battle Royal is unknown at this time, Candice still may appear at WrestleMania 25. She entered the company through the 2004 Diva Search, although she didn’t make it to the top 10. First appearing as a makeup artist on Raw, Candice went on to SmackDown where she became involved in the Melina/Torrie Wilson storyline. Torrie and Candice were both traded to Raw, where they teamed up with Victoria to form Vince’s Devils, where they taunted 2005 Diva Search Winner Ashley Massaro until Trish Stratus returned from an injury to help Ashley out. When Candice announced that she was posing for Playboy, Vince’s Devils began breaking up when Candice blamed Torrie for a loss she suffered in a Women’s Title match against Trish Stratus. Finally, at Candice’s Playboy unveiling, both Candice and Victoria turned on Torrie, leading up to a Playboy Pillow Fight match at WrestleMania 22 between Torrie and Candice, which Candice lost.

July of 2006 saw Candice’s turn to a face and her quest for the Women’s Title. Candice suffered her first injury at the hands of Victoria when Victoria kicked her in the nose, giving her a deviated septum. When sheÂ returned, she was given a huge push and feuded with then-championÂ Melina, where Candice finally beat Melina and won theÂ Women’s Championship at Vengeance. She would lose the title toÂ Beth Phoenix at No Mercy, and while trying to win the title back on an episode of Raw, CandiceÂ fell off the top rope after Beth pushed the ropes,Â breaking her clavicle. Candice returned on February 18, 2008 to Raw, though it was only a matter of time before her clavicle became re-injured. When she returned from the second injury on September 1, 2008, Candice was given a moderate push, thoughÂ when she lost a title match to Beth Phoenix atÂ No Mercy, her push stopped andÂ Candice appeared on TV less and less. She is currently out with an ankleÂ injury and it is unknown if she will recover in time for WrestleMania 25.

I personally think that Candice will be able to return at WrestleMania, especially if the WWE is so desperate for Divas that they are letting Santino in the match. Her time on Raw since returning from the second injury to her clavicle as greatly put a damper on her career. She was heavily pushed as the top face on Raw back in 2007, which was Candice’s golden year if you ask me. WWE has decided to push the likes of Raw Divas like Kelly Kelly, so Candice is really taking a backseat to other Divas. Her new ankle injury can’t help her in any way in trying to revive her character. I don’t think there’s any way Candice can win this match assuming she participates.

If there’s any way she wants to revive her character, I think she needs to get off Raw and head to SmackDown again, where she can play the #2 face behind Gail Kim and have a chance to compete for the Divas Championship. If she stays on Raw, she will never be put over the likes of Melina and Kelly as a face. She has garnered the reputation as very injury-prone, so I don’t think being in the ring with fierce competitors like Beth Phoenix will do her any favors. I do hope she participates at WrestleMania and can save her career, but she desperately needs something new like a trade to SmackDown.

Candice Michelle’s Odds of Winning On The Hassan-O-Meter: Low