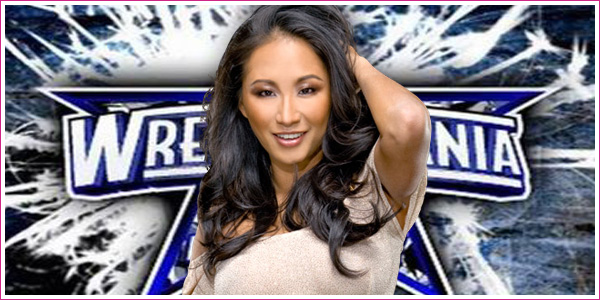 With the Divas Battle Royal at WrestleMania 25 quickly approaching, Diva Dirt has decided to take a closer look at each of the known and rumored participants in the matchup and assess their odds of winning as being High, Moderate, or Low. The winner, of course, will be crowned the first ever â€œMiss WrestleMania.â€ This is a new feature that will take place right up until the big day in Houston, TX on April 5th, 2009 and will be covered by yours truly, the â€œMouth of the South,â€ Hassan! I will save my prediction for the winner as the very last WrestleMania Spotlight profile I do. Be sure to leave your opinion in the comments! Letâ€™s get right into itâ€¦ check out the returning SmackDown Diva Gail Kim!

Diva: Gail Kim
Real Name:Â Gail Kim
Hometown:Â Toronto, Ontario, Canada
Birthday: February 20, 1977
Brand: SmackDown
Height: 5’4″
Weight: 125 lbs.
Finisher: Happy Ending (Straightjacket Neckbreaker Slam), Christo (Tilt-a-Whirl Headscissors Armbar),
WWE Debut: June 30, 2003 edition of Raw (First Time) & March 27, 2009 edition of SmackDown
Career Highlights: WWE Women’s Champion (debut match), first ever TNA Knockout Champion, Knockout of the Year (2007), FC Women’s Champion, AWF Diva of the Year (2001), ranked #3 of the 50 best female wrestlers by Pro Wrestling Illustrated, starred in the movie Royal Kill, featured in Forbes’ list of 40 Most Eligible Bachelorettes in 2007
â€œDid You Know?â€ Fact: Gail Kim, who has posed topless for cellphone ads in Korea, admitted to have breast augmentation before she made her debut in the WWE. She had her implants enlarged once she arrived, and was actually sidelined for a while when one of them ruptured. When Gail began wrestling in the AWF in 2000, she wore a mask, which she later competed against Traci Brooks in a Hair vs. Mask match, which she lost and became unmasked. A participant in TNA’s first ever women’s Ladder Match, Gail is the only Diva to hold Championship gold in both WWE and TNA

Gail Kim came into the wrestling industry in December 2000, joining the Canadian company AWF. She then worked in the independent circuit for 2 years, including in the BCW and WXW. She made friends with Jason Sensation, and in 2001, Jason introduced Gail Kim to Molly Holly, who encouraged Gail to tryout for the WWE. In October of 2002, WWE signed Gail to a developmental deal, where she spent 8 months in OVW before debuting on Raw in June of 2003, winning her debut match to become the Women’s Champion, her first and only reign.

Throughout 2003 and 2004, Gail initially worked as a face but later turned on friend Trish Stratus to align with Molly Holly. In November 2002, Gail was sidelined with a collarbone injury. When she returned, she stopped being a high-flyer and adopted a submission style, which was reportedly to avoid injuries again. Gail’s last match was on November 1, 2004 where she helped a heel Trish Stratus attack Lita. Gail was released the next day when WWE told Gail they wanted to take the Women’s Division “in a different direction.”

The October 8, 2005 edition of TNA’s iMPACT! saw the debut of Gail Kim. On May 15, 2006, Gail wrestled her first match on American soil since leaving the WWE and it was also TNA’s first women’s match in over a year. The Bound For Glory pay per view in 2007 saw the crowning of Gail Kim as the first ever TNA Knockout Champion, after she won a 10-Knockout Gauntlet match. At TNA’s Sacrifice, Gail won TNA’s first ever Women’s Ladder Match to become the #1 contendor to the Knockout Championship, which she lost to Awesome Kong. However, on August 20, 2008, Gail Kim and TNA couldn’t reach an agreement on the renewal of Gail’s contract, since the WWE was offering her much more money than TNA did. She was subsequently released from TNA.

The February 20, 2009 edition of SmackDown aired the first return promo for Gail Kim, which confirmed her signing with the WWE. She made her debut on March 27, 2009, interrupting a Divas Championship match on SmackDown between the Divas Champion Maryse and Michelle McCool.

Although the dreadful 18-Diva tag match on the March 30 edition of Raw was Gail’s official return to the ring, she didn’t even participate, so I’m considering the Divas Battle Royal to be her real debut. Gail’s much anticipated arrival to SmackDown has landed her the top face spot for the blue brand. I’m almost 100% confident that it’s only going to be a matter of time before Gail wins the Diva’s Championship and becomes the first Diva to hold the Women’s, Divas, and Knockout Championships. However, although she is the new top face of SmackDown, I don’t think WWE is going to let history repeat itself and have Gail win her first match back in the WWE, which also happens to be a Battle Royal.

I think the main reason people are speculating her to come out victorious is because she’s done it before, but I don’t think thats a good enough reason to give her the win. She still has a very good shot of winning to help push her character, but frankly I can see Michelle or Maryse eliminating Gail from the match as retribution for when Gail made her debut more than I can see her winning. But still, it is great to have her back on the roster and will be amazing to see her in the ring with Victoria, Torrie Wilson, Trish Stratus, and Molly Holly again.

Gail Kim’s Odds of Winning On The Hassan-O-Meter: High