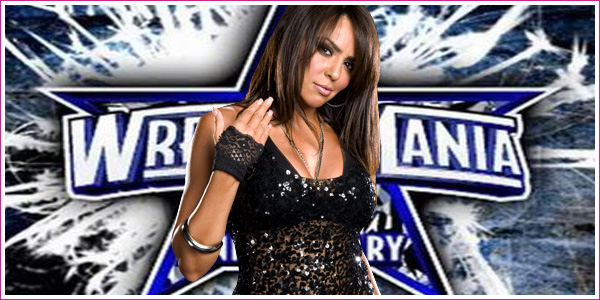 With the Divas Battle Royal at WrestleMania 25 quickly approaching, Diva Dirt has decided to take a closer look at each of the known and rumored participants in the matchup and assess their odds of winning as being High, Moderate, or Low. The winner, of course, will be crowned the first ever â€œMiss WrestleMania.â€ This is a new feature that will take place right up until the big day in Houston, TX on April 5th, 2009 and will be covered by yours truly, the â€œMouth of the South,â€ Hassan! I will save my prediction for the winner as the very last WrestleMania Spotlight profile I do. Be sure to leave your opinion in the comments! Letâ€™s get right into itâ€¦ here is Raw Diva Layla!

Layla has something special about her which doesn’t allow her to just fade in the background. I think this is what drew me to her in the Diva Search; she really stood out, and in a good way. I’m not a huge Diva Search fan, but I admit, I was rooting for her to win the contest and I voted for her… a lot. I don’t even think she has taken a bad photoshoot on WWE.com.

When Extreme Expose fell apart with Brooke’s release on November 1, 2008, Layla’s character got exactly what it needed: a heel turn. She’s such a good heel and plays the part so well that, to me, she’s a likeable heel, if that makes any sense. Layla really gets into the role, and you can tell just by looking at her facial expressions. Her draft to Raw put her into a role I think she does the best, a sly manager. That said, I don’t think her pairing with William Regal is a very good one. Sure, she may be the “Queen” since Regal won King of the Ring, but if her and Regal ever turned into the King Booker/ Queen Sharmell gimmick, I just might scream.

Layla should be managing someone in a more powerful spot on Raw, in my opinion, and should play a role as an arrogant “top Diva,” being deadly as both a manger and an in-ring competitor, but not a Women’s Champion just yet. It would be similar to a Stephanie McMahon kind of role; she isn’t a top wrestler, but you don’t ever want to get on her bad side.

Layla hasn’t had much training as a wrestler, but looking at her, you wouldn’t be able to tell; she looks like she’d kick serious butt in the ring. With proper training, I think Layla would definitely be a force to reckon with. Unfortunately, WWE has her pretty much stuck in this managerial position where she only gets involved in Regal’s matchups every so often. When she’s in the ring herself, it’s usually in tag team matches where she has anywhere from no time at all to about a minute to wrestle, which clearly isn’t enough to showcase her abilities. If she was in a different role my predictions would be much higher, but unfortunately, don’t expect Layla to win this thing!

Layla’s Odds of Winning On The Hassan-O-Meter: Low