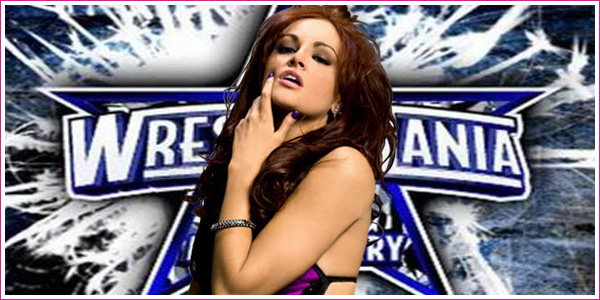 With the Divas Battle Royal at WrestleMania 25 quickly approaching, Diva Dirt has decided to take a closer look at each of the known and rumored participants in the matchup and assess their odds of winning as being High, Moderate, or Low. The winner, of course, will be crowned the first ever â€œMiss WrestleMania.â€ This is a new feature that will take place right up until the big day in Houston, TX on April 5th, 2009 and will be covered by yours truly, the â€œMouth of the South,â€ Hassan! I will save my prediction for the winner as the very last WrestleMania Spotlight profile I do. Be sure to leave your opinion in the comments! Letâ€™s get right into itâ€¦ golf claps for SmackDown Diva Maria!

If there was ever a Diva we love to hate, it would be Ashley Maria. As a huge supporter of the Divas, there is always bound to be that one lemon that gets the brunt of the negative attention; for me, this Diva is Maria. I just can’t grasp why someone who has minimal wrestling experience, can’t really act, hasn’t really developed character-wise inÂ 5 years, and only puts on a minimally passable wrestling match once in a blue moon has gone as far as Maria has, passing other Divas who deserve it a lot more than she does.Â

The 2004 Diva Search was how Maria got her break into the WWE. Her notorious elimination was probably how she really got the attention of the WWE and subsequently, a job. When her elimination was announced, she turned and gave Carmella DeCesare the finger before exiting the ring. The WWE sent her down to OVW following the Diva Search, but all she did was contribute booking ideas to director Paul Heyman. She was then sent to Raw as the clueless backstage interviewer, asking dumb questions and irritating Superstars and Divas alike. One time, she was even slapped by Trish Stratus so hard that one of her fillings fell out! Her first matchup was on Raw of January 10, 2005, where she lost a Lingerie Pillow Fight to 2004 Diva Search winner, Christy Hemme.

Throughout 2006 and early 2007, Maria wrestled on and off in the ring, often feuding with Melina and Vince’s Devils: Victoria, Candice, and Torrie Wilson. In June of 2007, Maria engaged in an on-screen relationship with Santino Marella, playing the role of a neglected girlfriend. Ashley Massaro‘s return to the WWE in 2008 began the Maria-Playboy storyline, where Ashley suggested that Maria pose for the magazine, angering Santino. On February 18, 2008, Maria defeated Beth Phoenix toÂ earn the right to pose for Playboy. Santino had enough and gave Maria an ultimatum, him or Playboy. Maria chose Playboy and the relationship with Santino was over. Maria and Ashley lost to Beth and Melina at WrestleMania XXIV.Â August 1, 2008 saw the debut of Maria on SmackDown. She wonÂ the right to face MichelleÂ and Maryse onÂ various occasions for the Divas Title, but always came up short.

As JR would say, “bless her heart,” butÂ no matter how hard I try I can’t force myself to like Maria.Â She calls herself a fashion designer and an aspiring singer, but why doesn’t she putÂ WRESTLER on this list? Her fashion choices are horrifying 90% of the time, and what bugs me is how she intentionally does this to “stand out.”Â Her ring outfits are no less tragic. Her pouting in pictures really irks meÂ as well; Maria, you’re not a model, you’re in the WWE! World… Wrestling… Entertainment! The biggest mistake was letting Maria out of OVW so early to head to Raw. She should’ve stayed there until she was trained to wrestle like every other Diva. Just throwing her in the ring for 4 years won’t turn the ugly duckling into a swan;Â just look atÂ her matches on SmackDown. Or better yet, just look at her post-matchÂ run in attack against Michelle McCool, otherwise known as her infamous arm-flailing slap attack.

What’s even more annoying is that the WWE continues to push her above other Divas. While Natalya walks to the ring as a manger, Maria is getting title shots. Why is this acceptable? She is even expected to have an eventual title run with the Divas Championship before she intends on heading back to Raw and winning the Women’s Championship. What’s worse is that I can totally see her “winning” the Divas Championship in the future, just because the WWE likes her so much. Why? I’ll never understand. All she’s done since entering the WWE 5 years agoÂ is act brainless and take a million pictures on WWE.com. Send Maria toÂ FCW and push a Diva who deserves it likeÂ Katie Lea, Alicia Fox,Â Natalya, Jillian… the list goes on and on. If she can get her act together, I’m all for having her around. But really, she doesn’t deserve what she’s gotten so far just because she posed for Playboy.

Just for the sole fact that WWEÂ is in love withÂ Maria so much and a lot of male fans cheerÂ for her since she’s sooooo “hot,” I honestly wouldn’t be surprised if Maria won the Battle Royal at WrestleMania. It’s all the ingredients to a typical WWE set-up: attractive Diva, no real wrestling ability, popular among (male) fans, over-pushed, and would make absolutely no sense to do.Â Â

Maria’s Odds of Winning On The Hassan-O-Meter: Moderate