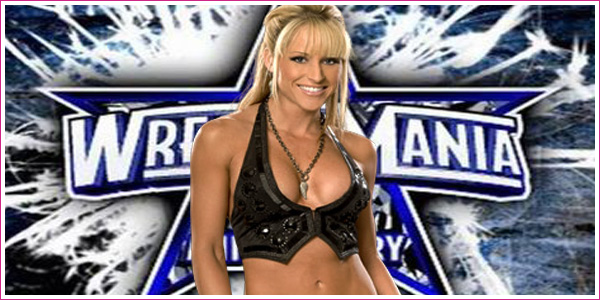 With the Divas Battle Royal at WrestleMania 25 quickly approaching, Diva Dirt has decided to take a closer look at each of the known and rumored participants in the matchup and assess their odds of winning as being High, Moderate, or Low. The winner, of course, will be crowned the first ever â€œMiss WrestleMania.â€ This is a new feature that will take place right up until the big day in Houston, TX on April 5th, 2009 and will be covered by yours truly, the â€œMouth of the South,â€ Hassan! I will save my prediction for the winner as the very last WrestleMania Spotlight profile I do. Be sure to leave your opinion in the comments! Letâ€™s get right into itâ€¦ enter the world of SmackDown Diva Michelle McCool!

Michelle McCool entered the wrestling industry through the 2004 Diva Search. Although she was the fourth participant eliminated, the WWE signed her right after her elimination to a 3 year deal. Her first match came on March 3, 2005 where she teamed with The Big Show to take on Renee Dupree and Dawn Marie, which Michelle and Big Show won. Following the debut of MNM, Michelle came to the aid of Heidenreich who was the recipient of attacks by MNM. This led to Michelle taking on Melina in Melina’s debut match, which Michelle lost. MNM delivered a Snapshot to Michelle McCool soon after and she left WWE television for the next year.

Michelle was then sent to DSW and later OVW to continue training and manage her “Teachers Pets.” She came back to SmackDown in June of 2006, where she worked her teacher gimmick as a heel, feuding with faces Jillian and Ashley. However, in November of the same year, Michelle faced a life threatening illness and went off WWE TV again.

March 30, 2007 saw the re-re-return of Michelle McCool to SmackDown, where she went back to feuding with Jillian. Michelle also has some Battle Royal experience, as she participated in the Memorial Day Bikini Beach Splash Battle Royal on May 28, 2007, which she won. Following this, Michelle feuded with Victoria briefly before entering a storyline with Chuck Palumbo and Jamie Noble. Once this storyline was finished, there was a “Top Diva” contest on SmackDown, involving Michelle, Eve, Maryse, Cherry, and Victoria. Michelle would go on to win this, and during her celebration, Natalya Neidhart made her debut, attacking Michelle. It was announced that a Divas Championship was being created and Michelle would go on to defeat Natalya at the Great American Bash to win the Championship. After defending her title against Maryse,Â Victoria, and even Maria, Michelle McCool would make a heel turn following her loss of the Championship to Maryse on December 26, 2008, where Michelle blamed Maria (theÂ guest referee) for losing the match.

For me, as much as I don’t particularly think it would be a good move, I think Michelle McCool’s odds of winning this match are very high. She has been talking about WrestleMania a lot, especially on her blogs, saying that it’s time to start a WrestleMania winning streak of her own. This is her first WrestleMania match, but I think a win here would keep Michelle right at the top of the SmackDown Divas division. She is definitely going to be seeking retribution against Gail Kim for ruining her title match and beating her and Maryse this past SmackDown, so look for Michelle to possibly be the one to eliminate Gail. I think it would be very wise to letÂ one of the “Present” WWE Divas win the match, and having MichelleÂ go on to winÂ would definitely boost her character. Michelle is definitely turning up the wow-factor on her offense, and I was pretty amazed at her work in the tag match with Maryse against Gail and Maria. She is also really working on her character development as a heel and I think it’s really getting better. WWE is obviously very keen of Michelle and she would definitely be made into the ultimate egotistical heel if she won this match, so I think it’s a great possibility Michelle will walk out the winner.