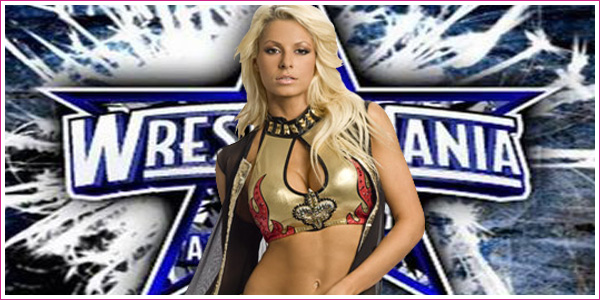 With the Divas Battle Royal at WrestleMania 25 quickly approaching, Diva Dirt has decided to take a closer look at each of the known and rumored participants in the matchup and assess their odds of winning as being High, Moderate, or Low. The winner, of course, will be crowned the first ever â€œMiss WrestleMania.â€ This is a new feature that will take place right up until the big day in Houston, TX on April 5th, 2009 and will be covered by yours truly, the â€œMouth of the South,â€ Hassan! I will save my prediction for the winner as the very last WrestleMania Spotlight profile I do. Be sure to leave your opinion in the comments! Letâ€™s get right into itâ€¦ here is my pick for the winner of the Divas Battle Royal and the first ever Miss WrestleMania, the sexiest of the sexy, SmackDown Diva Maryse!

Maryse began her wrestling career by entering the 2006 Diva Search, through which she made it to the top 8. Though she was cut on July 24, 2006, the WWE offered her a developmental contract to OVW on August 24, 2006. She began by participating in bikini contests and interviewing backstage, but soon found herself managing Renee Dupree at one point and later SylvanÂ Grenier when she was transferred to FCW. Though Maryse and Sylvan were seen at house shows and in dark matches, the WWE decided to drop the French heel gimmick before they made it to television. Maryse went on to be the valet to Ted DiBiase, Jr. and was in his corner when he captured the FCW Championship.

From September 22, 2006 through January 2007, Maryse appeared in vignettes welcoming viewers back to SmackDown. By mid 2008, Maryse began appearing on SmackDown regularly, competing in the SmackDown Top Diva contest. Her first feud and storyline came with former Diva Cherry, after Maryse felt insulted that Cherry lasted longer than her in the contest. Soon, Maryse took over the role as Deuce & Domino’s manager. May 16, 2008 was the in-ring debut of Maryse on SmackDown, where she lost to Cherry. When Cherry was released, Maryse had a short feud with Maria (due to Maria breaking Maryse’s nose) before getting her first heel push and a Divas Championship title match against Michelle McCool at Unforgiven 2008, which she lost. Her push continued when Maryse was the sole remaining Diva representing SmackDown in the 5-on-5 Raw vs. SmackDown Survivor Series match, though she lost to Beth Phoenix. Finally, on December 26, 2008, Maryse pinned Michelle McCool to begin her first reign as Divas Champion.

When I first saw Maryse, I thought she was all bark and no bite. But after seeing her in the ring during her feud with Cherry in mid-2008, I declared Maryse to be the next big thing. Fortunately, I was right, and Maryse has really grown on me. Sure, she may have a heavy accent, but she plays her character so well that is amazes me how someone so new to this industry has grown so much and so fast, and does it better than a few Divas who have been there much longer than she has. Her wrestling skills have also improved so much since she began the hunt for the title. Maryse developed her own moveset and she usually doesn’t give the impression that she is a newcomer. She is such a cocky heel but fits the character description perfectly, and this is why Maryse is my favorite Diva. She’s got the look, she’s got the music, she’s got her character nailed down, she looks polished in the ring, and she takes amazing photos; to me, Maryse is the package deal, and with more time she will perfect her wrestling and I see a bright future for Maryse.

Other than the fact that she is my favorite Diva, I picked Maryse to be the winner of the Divas Battle Royal at WrestleMania for a few reasons. I think we all know that it will only be a matter of time before the returning Gail Kim captures the Divas Championship; therefore letting Maryse win will not only further boost her ego as a heel for character development, but it would also keep her as the front-runner to her title as a top heel. It would also help out Gail’s character, because she would be the one toÂ beat Miss WrestleMania. Then, there is her status in the company. Vince McMahon is said to have very high thoughts of Maryse, which is always a good thing to have. With the Chairman thinking highly of you, it probably increases your chances of making a name for yourself (look upÂ Triple H). Also, there are rumors swirling that Â Maryse might be headed over to Raw in the 2009 Draft, which remember is only a week away! If Maryse gets the title of Miss WrestleMania and then sent to Raw, she will definitely be one of Raw’s top Divas almost immediately, and once she drops the title to Gail, she could be in line for a run with the Women’s Championship. So, assuming we don’t get a lame factor like Santino winning the match, I predict Maryse to be the first ever Miss WrestleMania!

Maryse’s Odds of Winning On The Hassan-O-Meter: High

So there you have it! This concludes the WrestleMania Spotlight feature! Thanks for all your comments and feedback; I really hope you guys enjoyed reading these even if they were a bit lengthy. They may have taken up plenty of time to make,Â but I enjoyed doing every one of these! Let’s see what happens tonight at the 25th Anniversary of WrestleMania in the Divas Battle Royal!