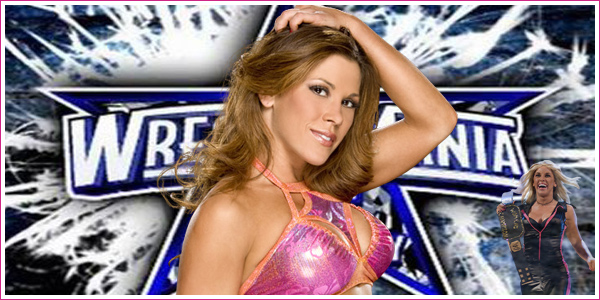 With the Divas Battle Royal at WrestleMania 25 quickly approaching, Diva Dirt has decided to take a closer look at each of the known and rumored participants in the matchup and assess their odds of winning as being High, Moderate, or Low. The winner, of course, will be crowned the first ever â€œMiss WrestleMania.â€ This is a new feature that will take place right up until the big day in Houston, TX on April 5th, 2009 and will be covered by yours truly, the â€œMouth of the South,â€ Hassan! I will save my prediction for the winner as the very last WrestleMania Spotlight profile I do. Be sure to leave your opinion in the comments! Letâ€™s get right into itâ€¦ get really hyper and excited for Raw Diva Mickie James!

Mickie James got into the professional wrestling industry after a friend suggested she try out at a wrestling school in Washington DC. She got into the independents in 1999, where she led Tommy Dreamer to the KYDA Heavyweight Championship as his valet. She continued working the independent circuit as well as training in Ring of Honor. In March of 2003, she appeared in TNA under the name Alexis Laree, which is a combination of her dancer name as a child and her middle name. Her time in TNA was spent feuding with Trinity and competing in several male and intergender matches. Finally, after years of calling the WWE and having a tryout match with Dawn Marie, she began appearing in OVW.

October of 2005 saw the debut of Mickie James on Raw as an obsessed Trish Stratus fan. This obsession continued until March of 2006, where Trish told Mickie they should seperate after Trish had enough of Mickie’s outfit copying, interfering, and even kisses. Mickie made her official heel turn at this time, promising to destroy Trish, which she did at WrestleMania 22 when she defeated Trish to earn her first run as Women’s Champion (the fans actually cheered Mickie who was a heel while they boo’d Trish). After Trish retired from the WWE, a tournament was held to crown a new champion. Mickie lost to Lita at Cyber Sunday and Lita became the Champion. However, Mickie defeated Lita in Lita’s final match at Survivor Series to retire Lita and win the Championship again for the second time. Mickie would win the title for a third time at a house show in Paris in a triple threat match against Melina and Victoria, but at a televised rematch just days later, Mickie lost the title back to Melina. Mickie had her fourth run as Champion when she beat Beth Phoenix in London on April 14, 2008. Since losing the title back to Beth, Mickie has continued being one of the most popular Divas among the fans but has taken a backseat to the title hunt to Melina.

If it were up to the fans, Mickie would probably be a front-runner to win the Battle Royal, since she won the fan-voted Halloween Costume contest this past year. However, I don’t see WWE giving Mickie the win here. Since Melina returned as a face and captured the Women’s Championship, Mickie hasn’t been involved in too many storylines other than her recent match with Santino. It seems as if WWE is even pushing Kelly Kelly more than they are Mickie now since Mickie has been doing more backstage segments than actual wrestling. There just seems to be no motive to award Mickie the title of Miss WrestleMania. Since she is so popular among the fans, I still think there’s a possibility. I think she’ll remain in the ring for a good portion of the match but won’t make it to be one of the final Divas standing. Creatively, she really has nothing going on and her face character has been getting stale.

If it were up to me, I also wouldn’t award Mickie the win, but instead, I’d use WrestleMania as a golden opportunity to revive Mickie’s character by turning her into a psycho heel again. If she can get more cheers than Trish as a heel, she should probably get that gimmick back ASAP. If Trish is going to be in the matchup, why not have some retribution and let Mickie toss out Trish? Do it WWE! Make Mickie a heel!

Mickie James’ Odds of Winning On The Hassan-O-Meter: Moderate