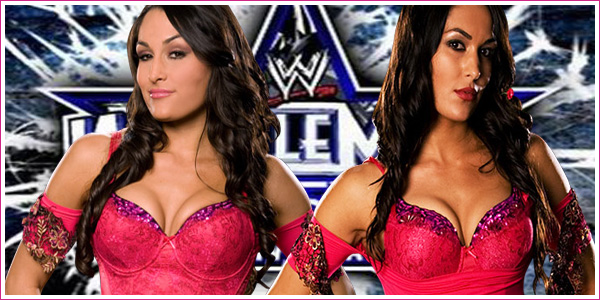 With the Divas Battle Royal at WrestleMania 25 quickly approaching, Diva Dirt has decided to take a closer look at each of the known and rumored participants in the matchup and assess their odds of winning as being High, Moderate, or Low. The winner, of course, will be crowned the first ever â€œMiss WrestleMania.â€ This is a new feature that will take place right up until the big day in Houston, TX on April 5th, 2009 and will be covered by yours truly, the â€œMouth of the South,â€ Hassan! I will save my prediction for the winner as the very last WrestleMania Spotlight profile I do. Be sure to leave your opinion in the comments! Letâ€™s get right into it… I present to you SmackDown Divas Nikki & Brie Bella!

As much as I didn’t want to do these two together, there isn’t a whole lot to talk about in regards to each one individually. They came to the WWE as a package deal and there’s no real way to talk about one without the other. Though they have only recently split up, their storylines and matches all go hand in hand with each other, so I decided I’d combine them into one. Plus, we’re running out of time here and there’s not enough days before WrestleMania to give every Diva their own day ;)

That being said, I think everyone can pretty much guess that neither of the Bella Twins are going to be crowned Miss WrestleMania. They were just put into a rather interesting storyline involving the Miz & Morrison and Carlito & Primo, plus they haven’t really been active in the Divas division or the hunt for the Divas Championship. Their primary focus at WrestleMania is going to be in the Tag Team Title Unification Match involving their respective tag teams. Both sets of tag titles will be on the line and it is pretty much a guarantee that Nikki and Brie will be at ringside, although on opposite ends. I’m sure WWE is going to put their creative focus on the Bellas with the sister vs. sister gimmick, not the Divas division. Their breakup storyline is too new for either one of them have any sort of huge impact in the Battle Royal.

The real question is if or how they are going to impact the Tag Title unification match, and I think WWE is more concerned with their role in that match than they are in the Battle Royal. It will be obvious however that the Bellas are not going to be allies in the Battle Royal as would’ve previously been the case had they not broken up. Maybe they will start out with Nikki telling Brie they should work together and then settle it at the end between themselves when they are the final two, but Nikki, being the heel, will turn on Brie and try to eliminate her. Brie will get mad and end up countering one of Nikki’s moves and eliminating Nikki from the match. Then, while she is trash talking Nikki, someone will come and eliminate her and then the Twins will point fingers and blame the other for their elimination, then scuffle outside the ring.

I’m pretty sure that’s going to be the extent of the Bella Twins’ role in the Battle Royal. Better luck next year!

The Bella Twins’ Odds of Winning On The Hassan-O-Meter: Low