WrestleMania isn’t just the grandest stage of them all for wrestling — it’s also the one time of year when Superstars and Divas put that extra mile into creating show-stopping ring attire. WrestleMania for ring attire is like the red carpet at the Oscars, this is the one outfit that you must get right because it will be etched in the annals in history forever! So, being the style hounds that we are, we’ve delved into the history books to bring you some of the best and worst looks from WrestleManias past! 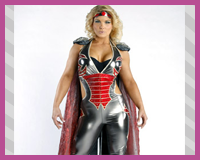 Beth Phoenix, WrestleMania 25
Just last year, the Glamazon certainly looked dramatic in all the right ways for the Miss WrestleMania battle royal in her silver Glamasuit complete with a cape. This had a Roman gladiator feel to it that fits perfectly with Beth. Too bad that given the nature of the awful match she wore it in, we barely got to see Beth’s outfit on the show but it was definitely a striking look for Beth. Perhaps she could get away with wearing it two years in a row tomorrow night? After all, no one really got a good look at it last year and it seems like such a waste! I mean, we’d be pissed. However, Beth can seek comfort in the fact that we consider it to be Glam Slam-ingly breathtaking. 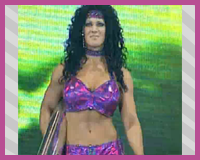 Chyna, WrestleMania 17
Not to sound offensive but Chyna was never really known for her femininity during her time with WWE. Often seen in black and built like one of the guys, Chyna’s venture into the women’s division in 2001 saw a more feminine side to the 9th Wonder of the World. For WrestleMania 17, Chyna ditched the black and went with a captivating purple ensemble and even accesorized! Not dissimilar to Beth’s headband above, Chyna sported some funky headgear too and even a choker around her neck. This was not the hard-faced, braid-wearing Diva we had met several years prior. Chyna looked great and had a picture perfect moment that night when she added another accessory to her outfit — the Women’s Championship. 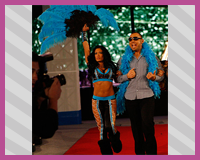 Melina, WrestleMania 24
One Diva who has always known the grandeur of a WrestleMania outfit is Melina. She made her debut at WrestleMania 23 in an outfit that WWE.com considered one of the best ring attires in ‘Mania history. We agree — to an extent. Her hoodie was a nice touch. But one year later, this was an outfit that made her prior one look like roadkill left to rot! This striking electric blue and black combo immediately catches your eye. The shade of blue used is perfection — it’s bright, it’s piercing and it’s unforgettable. The detailing on the top is also intricate and beautiful. Then there’s the feathers. What better way to make a dramatic, memorable entrance than that? 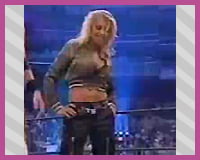 Trish Stratus, WrestleMania 20
Not a ring attire per se but I remember loving this look at WrestleMania 20 when I saw Trish come out. In fact, I still do. The sleek and stylish Stratus wore the hell out of that cropped jacket but it was the bottom half that I particularly loved. Trish made combat pants look sexy as she tucked them into a pair of sexier high heeled boots that I still love to this day. Stratus looked kind of tomboy-ish but with her own twist that made it look like a sexy, Stratusfying outfit. 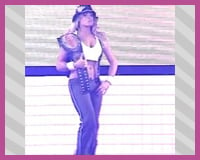 Trish Stratus, WrestleMania 21
Making the list twice because she’s just that nice, Trish Stratus. The Diva defended her Women’s Championship at WrestleMania 21 against Christy Hemme and her outfit at the event was a little unorthodox but I loved it. Consider it to be a wrestling version of a suit as Trish had the hat, the suspenders and looked extremely dapper at WrestleMania Goes Hollywood in 2005. I really liked Trish’s vision here and I think it came together great and she pulled it off. This was a super cute outfit from Trish, perhaps only second to the one above. 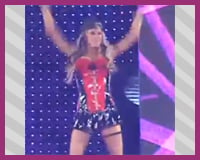 Ashley, WrestleMania 23
Considering the controversy surrounding Ashley in her final months with WWE [Ashleygate], there are many jokes that could be made looking back at her outfit at WrestleMania 23. We won’t make them… but they could be made. Passing off lingerie, and trashy lingerie at that, as wrestling attire made Ashley stick out like a sore thumb at ‘Mania 23 — for all the wrong reasons. Her corset and fishnets were about as classy as sex in public. Then again, her outfit a year later at WrestleMania 24 was no better. Oh, that Ashley. How she even got on a ‘Mania card let alone two is beyond us. 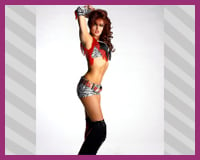 Maria, WrestleMania 25
Had Maria known this would be her last WrestleMania… well, actually, I don’t think she’d have gone for something better. Just like the rest of Maria’s wardrobe through the years, this piece of ring attire was bewildering, perplexing and a hot mess to the nth degree. No doubt this was another home-made creation from Ms Kanellis — combing her love of animal print with tassles and far too much overaccessorizing. 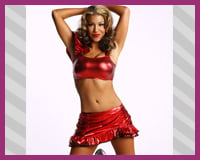 Rosa Mendes, WrestleMania 25
Another offender from last year’s pack of ‘Mania Divas was the usually stylish Rosa Mendes. Thankfully she’s given up the gaudy metallic ring attire since then but there’s no unthinking this one. Looking like Bella Twin #3, Rosa’s pleated skirt only fed my anger for wrestling in skirts that much more. There was far too much of one colour here, especially in a fugly metallic colour too — it’s enough to nauseate you. 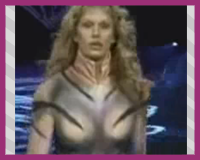 Tori, WrestleMania 15
Perhaps the biggest ‘WTF?!’ in not only WrestleMania history, but Divas history, is Tori’s body suit at WrestleMania 15. I’m not quite sure what Tori was going for here — something ‘out there’ and at one with nature, perhaps? How that turned into this fugly concoction is beyond me and frankly seeing this again after all these years gives me second hand embarassment. Oh Tori…

Share your favourite and least favourite ‘Mania outfits in the comments!