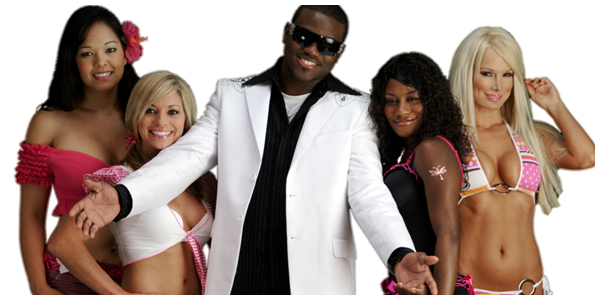 Wrestlicious premieres it’s new flagship show, TakeDown next Monday night across North America after nearly two years of planning and preparation. As Monday night draws nearer, Diva Dirt has been given exclusive access to the stars of Wrestlicious including founder and owner JV Rich.

Winning millions in the Powerball at just 19 years old, JV coupled his passion for wrestling and love of hot women into Wrestlicious. So, with his very own wrestling show about to premiere, we got all the scoop from JV:

Just days away from the series premiere of Wrestlicious TakeDown, are you feeling nervous at all?
Much more excited than nervous. I am confident we have a great show.

As has been mentioned in the media, you are of course a Powerball winner and invested some of your millions into this project. Would you say it’s been money well spent?
I think it has. Time will tell of course. It certainly has been an awesome learning experience. Best case, we have a huge hit. Worst case, I have a tax write off. By the way, if I could, I would like to clear up the misconception that I put millions of dollars into this project. For the record, I put considerably less than 10% of my after-tax lottery winnings into Wrestlicious. And our team brought it in on budget.

It’s been nearly a year since Wrestlicious was announced, what has the process been like in the last year getting from that original promo clip to the television series?
To be honest, easier than I thought. We did have a small delay that moved us from late-Fall 2009 to Winter 2010, but besides that everything pretty much moved along according to our plan. I can’t say it enough, everyone has worked extremely hard to make TakeDown happen.

What can we expect from the first show when we tune in on Monday night?
A fun sexy show, that everybody but the most serious, die-hard wrestling fans will enjoy. You’re going to be introduced to some great, entertaining characters including Cousin Cassie, Felony, Toni The Top, Tyler Texas, Autumn Frost, Kandi Kisses and Bandita in that first episode. And the wrestling will be stronger than most people think it will. It will be very, very character driven. In fact two thirds of the show will be sketches and other character development stuff, with about one third being in-ring wrestling. Even the commentary will be as much about describing the characters as describing the action. Remember, TakeDown is an action-comedy show, The Man Show meets Hee Haw meets female wrestling. This is the premise it was sold as, an action-comedy with wrestling as the vehicle. And that’s how we’re delivering it

As an on air personality on the show, what can we expect from JV Rich?
A guy fresh off acting lessons, so be gentle! On camera, I’m just trying to live my new life and am thrown into the Wrestlicious chaos. There is also an issue that I want to clear up here. I never demanded or even suggested that I appear in the show. Our team thought it would be a good idea to have a on-air personality that reflected our target demo. They actually had to talk me into it. And they brought it up after the show was financed. [Laughs]

I’m sure you’re fond of all of the Wrestlicious girls but do you have any particular favourites or standouts?
Cousin Cassie really impressed me. All the girls have been great, but she gives 110% all the time. She really is that character, sweet and down-home.

You have an extremely experienced team working on Wrestlicious with you including Johnny C [GLOW] and Jimmy Hart [WWE Hall of Famer], what has been your backstage input in the product?
Jimmy, Steve Blance and Johnny run everything by me for my input and approval. But most of the time, I just nod. [Laughs] You’re right, those guys really know what they are doing. I’ve learned alot from just being around them.

You’re a wrestling fan just like the rest of us, was there anything you saw in other products and thought, “I can do this better” with Wrestlicious?
Not really. I just thought wrestling could use a modern day GLOW. I have seen the tapes and loved that show.

We’ve seen a lot of the crazy characters in the promo videos but our readers love their women’s wrestling. Just how good is the wrestling would you say? Better than TNA or WWE?
I would say that most of it is on a par with those companies. Remember we have 17 of the PWI top 50 female wrestlers in the world on our roster. That’s one third!

Wrestling fans have always associated Mondays with wrestling, Wrestlicious is in prime real estate on Mondays at 11pm following Raw. Was that a conscious decision by Wrestlicious’ producers?
We sold the show to the networks and they placed it there. But we’re thrilled with the time slot, of course. America One has us programmed Saturdays at 11:30pm ET, which is also a great time slot for our product. Most of our syndication partners are running the show at 4pm ET on Sundays, with a 12:30am encore. That 4pm time slot should help us get some kids into our fan base, which was a huge part of GLOW’s success.

And of course, TNA is now moving to Monday nights giving wrestling fans 5 hours of first-run content on Mondays alone. How do you think that will affect or help Wrestlicious?
It should help drive viewers to us after those shows air.

Finally before we wrap up, can you give us a Wrestlicious rap?
# I’m JV Rich, I own the show / I’ve got the ring, I’ve got the bling and I’ve got the dough / This new show has fulfilled all my wishes / So Diva Dirt, thanks for helping Wrestlicious! #

Wrestlicious TakeDown premieres on Monday, March 1st at 11pm ET on Mav TV in America and Bite TV in Canada. Episodes will also air on America One on Saturdays at 11.30pm ET. For syndication, check your local listings. Full length episodes of Wrestlicious will appear at www.bite.ca/wrestling the day after transmission.