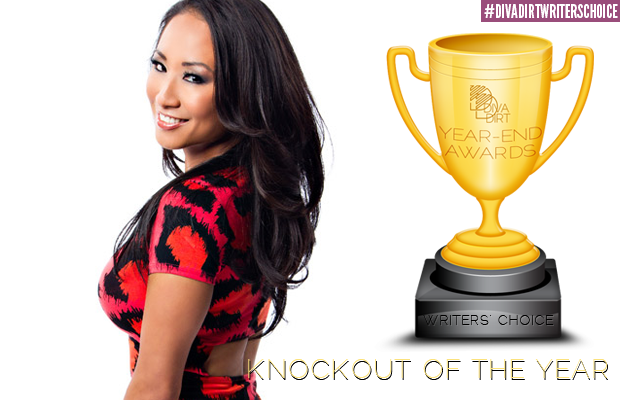 Diva Dirt presents its third annual Writers’ Choice Awards, the awards that celebrate the year in women’s wrestling, as decided by the editors and contributors of Diva Dirt. The Diva Dirt team has watched hundreds of episode of wrestling television this year, followed a countless number of wrestlers and reviewed tons of matches. Now, as we come to the end of 2013, we have picked the best of the best to be awarded our Writers’ Choice trophies.

Knockout of the Year: Gail Kim

For the second year in a row, Gail Kim comes out on top of TNA’s Knockouts division. Honestly, did anyone expect any different?

Gail spent most of the year out of the title picture, but managed to compete in our Match of the Year anyways, building a side feud with Taryn Terrell into a rivalry that featured two show-stopping matches: a Last Knockout Standing match (the aforementioned MOTY) and a Ladder match. These matches showcased both Taryn’s remarkable in-ring improvement and Gail’s ability to bring out the very best in her opponents.

Then came the low point. Departures by Taryn Terrell, Mickie James, Madison Rayne and Tara left fans believing that the Knockouts division, if not TNA as a whole, was on its last legs. To say that Gail was the glue that held the division together would be an understatement. She was the only Knockout left that could carry the division, and carry it she did.

Gail’s popularity amongst fans, as well as her fine-tuned in-ring skills, made her mere presence enough to keep the division relevant. She helped rebuild it from its lowest point in September, winning the Knockouts Title at Bound For Glory in October and bringing in new Knockout Lei’D Tapa as her muscle, providing the division with much-needed fresh blood.

The Gail Kim Open Challenge gave indy women wrestlers a moment in the spotlight and opened the door for the recent return of Madison Rayne, Gail’s former BFF. That feud alone could sustain the division for the foreseeable future while giving fans a piece of the Knockouts’ glory days. And to think, just a few months ago, we were reading the division its late rites.

The Knockouts division is on the road to recovery, and when it finally returns to form, you’ll have Gail Kim to thank for that.

Come back later today to see which women were crowned 2013’s Diva and Wrestler of the Year.