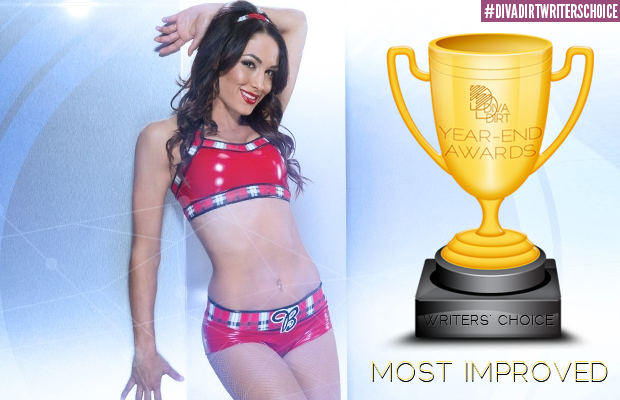 Diva Dirt presents its third annual Writers’ Choice Awards, the awards that celebrate the year in women’s wrestling, as decided by the editors and contributors of Diva Dirt. The Diva Dirt team has watched hundreds of episode of wrestling television this year, followed a countless number of wrestlers and reviewed tons of matches. Now, as we come to the end of 2013, we have picked the best of the best to be awarded our Writers’ Choice trophies.

When the Bella Twins left World Wrestling Entertainment in April 2012, fans were left wondering if they would ever see the sassy duo of Brie and Nikki grace their television screens again. Both women had been in the company for quite some time, both had held the Diva’s Championship at some point, and it seemed like everything had come full circle for both of them. But thankfully for us, the girls decided they weren’t finished with the company (on camera anyway…) and made their return to the company in March of this past year. Little did we know what this return would morph into.

Brie and Nikki made their return to television in a backstage segment with Team Rhodes Scholars (that’s Cody Rhodes and Damien Sandow for those of you that live on another planet). That led to a feud with the Funkadactyls, Naomi and Cameron, and eventually we found ourselves with a glorious eight-person tag team match set for WrestleMania in New Jersey. Bitter, cold New Jersey…. and it proved to be a not so nice night for all eight that were set to take part in that match. As we know, it was axed from the show and shoved on Raw the next night, and as we soon found it, that was only the beginning for the Bella Twins.

Total Divas became a hit for the twins, as well as the other ladies involved in the ground-breaking reality show, and after an injury sidelined Nikki, Brie was given a the chance of a lifetime. We’ve never really gotten a chance to see what each twin could do on her own, and Brie took the ball and ran with it. During the summer months, we watched Brie mature come into her own as a wrestler. She was able to stand toe-to-toe with Natalya and AJ Lee, and she was able to connect with the audience like never before. She took her popularity from the show and carried it with her on camera, showing a lot of grit and determination during her matches, as well as more charisma. Her moveset became more complete and her drive to keep training was highlighted during Total Divas.

Brie not only got a chance to shine on her own, but she was given a chance to work alongside her main squeeze, Daniel Bryan, during his feud with Randy Orton, showing that she can hold her own with the top guys as well as the top girls. Everything that Brie brought to the table this year was something special, and it might be fair to say that the break away from the company was just what she needed to relight that fire. Brie’s stand-out performance came at SummerSlam where she delivered an amazing match with Natalya, which earned her a chance to square off against AJ for the Divas Championship. Brie might have come up short in all her championship shots, but she always came out looking stronger and like a fighter at the end of every match.

Brie Bella definitely came back to the WWE with a goal in mind and that was to be better than ever before. It’s a shame her sister spend the majority of the year on the injured, or we might have been writing about both of them. But regardless, every dark cloud has a silver lining and we got a chance to see just who Brie Bella really is, and lucky for us, that is nothing short of amazing.

Stay tuned for more Writers’ Choice Award reveals over the next few days.