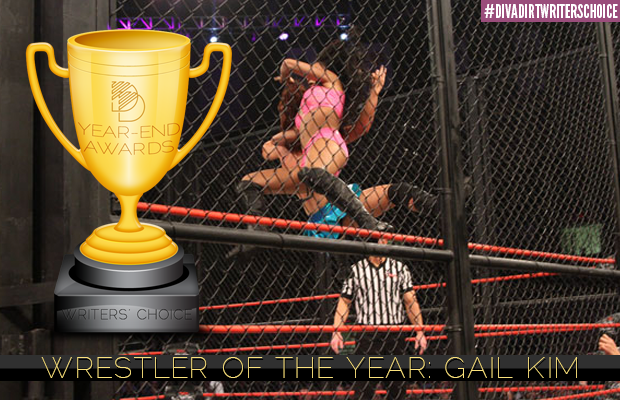 Wrestler of the Year: Gail Kim

Think of all the standout women’s matches you’ve seen this year. The ones you made a mental note to include in your personal “best of” list at the end of the year.

Chances are, Gail Kim wrestled in most of them.

The 2014 Knockout of the Year has competed in so many show-stopping matches that it’s become almost commonplace. You see her wrestle a fantastic match and you’re tempted to think, “Yeah, but it was a Gail Kim match. We knew it was going to be great.”

What better way to demonstrate that fact than to show her in action? Let’s take a look at the eight (count them, eight) Gail Kim matches that were nominated for Televised Match of the Year in the 2014 Diva Dirt Fan Awards:

In February, Gail attempted to regain the Knockouts Title from Madison Rayne a month after losing it, battling her former friend in a street fight:

In March, she took on Madison for the title again, this time in a Steel Cage match at Lockdown:

By July, Gail herself had the Knockouts Title and defended it in a Fatal Four-Way match, pitting her, Angelina Love, Brittany and Madison Rayne against one another:

In August, Gail again defended the title on a special Hardcore Justice-themed episode of Impact, wrestling Angelina in a Falls Count Anywhere match:

In September, she put the belt on the line against Taryn Terrell, leaving it all in the ring right before the terrifying debut of Havok:

In the finals of TNA’s British Boot Camp 2, Gail took off her judge’s hat to take on TNA hopeful Kay Lee Ray:

In November, Gail tried to overcome injury and the considerable threat of Havok to regain the Knockouts Title in the Impact Wrestling main event:

And finally, in what would be the last Knockouts match of 2014, Gail took on Havok and Taryn in a Triple Threat match for the Knockouts Championship:

What have we learned here? Gail can do it all. She can risk life and limb in a dangerous stipulation match, headline an episode of Impact and straight up out wrestle most (if not all) the wrestlers on the roster. 2014 threw everything it had at Gail Kim, and she more than met the challenge.