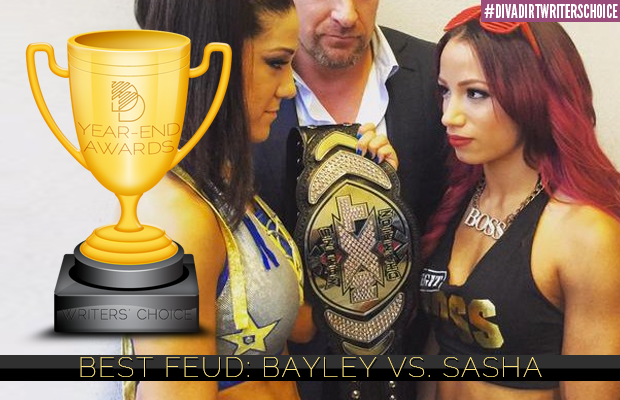 In wrestling, the best feuds are rather simple. You take your good guy and your bad guy. Your bad guy puts the good guy throw hell and then after all the dust has settled, the good guy comes out on top. In this post-Attitude Era landscape, most fans are looking for convoluted storylines and swerves here and there before their is a resolution. But for the NXT’s biggest feud of the year and our winner for feud of the year, they took that model and exploded it.

Let’s take a look at our hero, Bayley. She is a childlike mega wrestling fan. She makes friends with every person she meets and hugs all the fans on her way to the ring. She loses way more than she wins but at the end of the day, she has a heart of gold. She’s simply good. And this character, as well as her impeccable in ring skills have made her the most over woman in the WWE.

Onto the villain, Sasha Banks. She’s arrogant, selfish. She mocks every opponent in some way. Whether it is wearing Charlotte‘s t-shirt at NXT Takeover: REvolution last year or making fun of Becky Lynch‘s entrance pose at NXT Takeover: Unstoppable this spring. She bends the rules and doesn’t care about the crowd at all. Regardless of the boos or cheers, she’s show-stopping all through her matches.

Here’s the thing about this feud. It has been ongoing since 2013.

Sasha Banks was not always the cocky technician. She was a wide-eye rookie that tried her best and was beaten every single week. She was all about giving it her all but fell short each time. After a loss to Summer Rae, Sasha was doubting herself. And after the First Lady of NXT would attempt to make Sasha relevant but after a loss to then-NXT Women’s Champion Paige turning herself heel and thus was the launch of the “Boss” gimmick.

Bayley debuted that same year. She was a doe-eyed fangirl of the WWE, getting starstruck that she got to wrestle each of the Divas. Her overwhelming joy and niceness wore thin on the other Divas, leaving her to be bullied and attacked on several occasions. Whenever a girl wanted to established herself as a force to be reckon with, she would attack Bayley. But not once would Bayley change. No matter how many times she was insulted or counted out, she would get back up and smile and give it another go next time.

The two would face each other time and time again trading victories over the next two years.

Fast forward to February 2015. It’s a Fatal-4-Way match for the NXT Women’s Championship. Bayley delivered a Bayley-to-Bayley to Charlotte from the top rope. The crowd was on their feet. Their favorite was about to capture the title. She covered Charlotte. 1! 2! Then Sasha yanks Bayley out of the ring and picks up the scraps to pin Charlotte after a brutal Banks Statement to win the NXT Women’s Championship. In that moment, Sasha proved that to become the top woman in the division, you have to have no mercy, this is not about being nice, it is about getting the W. Yet again, Bayley was so close, yet could not grab the brass ring.

Sasha would rule the division defending her title in memorable matches and feuds, further establishing herself as a pillar of the division and as a draw for NXT.

If there was any moment for Bayley to lose her morals, the time would be now for her after being robbed for the title. But she didn’t. After a hand injury, Bayley would regroup and focus on her number one goal: becoming the NXT Women’s Champion. With her biggest fan Izzy leading the charge of the NXT fans, Bayley had the entire Full Sail crowd on her side as she set her quest to become a champion.

Bayley challenged Charlotte to a match after saying that she needed to beat the best to become the best. The match was thrilling, but as the match rode along, you could feel Charlotte gaining momentum. Bayley would fight back and would win the match with a top-rope Bayley-to-Belly. Bayley beat Charlotte! The underdog got one up on THE Diva in the division. The crowd went wild and that shot of Izzy overwhelmed with pride about this win make you tear up faster than Ric Flair doing anything. Things were finally going Bayley’s way, but you couldn’t help but feel she was being set up for disappointment.

The match that Divas fans joked about that have seen hundreds of times was now THE match.

After a very emotional contract signing ending in a brawl, the table was set. The two wide-eyed girls from 2013 were now different women. Women with a 2 year-tie that would explode in Brooklyn. Good vs Evil all in the name of the NXT Women’s Championship.

It’s showtime. NXT Takeover: Brooklyn. The crowd goes insane as Stephanie McMahon sings the praises of the Women’s division and announces both Divas on their way to the ring. Bayley comes out in gear honoring her mentor and instrumental advocate for the NXT Divas, the late American Dream Dusty Rhodes, and Sasha Banks entered the arena in a huge truck with a crew of bodyguards. The crowd is roaring for both women and the bell has yet to sound.

The following twenty-three minutes would redefine women’s wrestling, and shatter that damn glass ceiling. After destroying each other, Bayley would deliver a reverse hurricanrana from the top rope that made the crowd almost blow the roof off of the Barclays Center. She’d follow it up with a Bayley-to-Belly and pinned Sasha to FINALLY win the NXT Women’s Championship. The crowd is full of people in tears as I was. It was like heaven on Earth for Divas fans. Two women stole the show. They stole the damn year. The curtain call with all of the Four Horsewomen proved to be a true passing of the guard. Bayley, since her debut has been a fighter. After years of losing matches, being the foil to let heels get their heat, and never getting her moment finally had something to call hers. How fitting for the biggest Takeover ever to end with Bayley atop of the mountain as the NXT Women’s Champion.

The match received acclaim from around the world. Critics were hailing this match with the same iconic status of the Joshi classics of Manami Toyota and Aja Kong in the vain that the feud was beyond gender, it was just a great match. But there was something that most people believed. The match should have main evented. The NXT Championship Ladder Match with Kevin Owens and Finn Balor struggled to follow the Divas. Most fans said they didn’t even care what happened after the match. It did not matter what happened at SummerSlam the next night. Bayley vs Sasha Banks was the only feud, match, or moment that mattered that weekend.

Time passed and the internet was still buzzing. Would Sasha get her rematch? What was next for the NXT Divas? We would get our answer when Sasha would appear on NXT in another huge truck. Later in the show, Bayley made her first appearance as the new champion winning a quick match and as soon as she would grab the mic to discuss the biggest moment of her career, Sasha’s theme blares out and she interrupts Bayley.

Barely able to hold back the tears of pride, Sasha reverted back to the Boss. She respected Bayley know, but she still felt like she was the better woman. General Manager William Regal realized that this feud was the biggest thing in wrestling. He announced that they would main event NXT Takeover: RESPECT for the NXT Women’s Title. He upped the anti by adding the the stipulation of a 30-Minute Iron Man Match.

The rematch of the year was made as well as history. Sasha vs. Bayley II was a reality.

October’s NXT Takeover: RESPECT rematch was a master class in face and heel dynamics. Sasha stealing Izzy’s headband was a moment that fans will never forget. Bayley crashing through the stage was an insane image. The score was 2-2 when Bayley locks in an armbar on Sasha’s injured hand and Sasha taps and Bayley retains the title! The post match gesture with the flowers ended this feud better than anything.

This is the feud of the year for so many reasons. This was a story of two girls who took two different roads to change the world of women’s wrestling. This was beyond heels and babyfaces. This was beyond matches. This feud was the metaphor of the NXT Women’s Division. Like both women, the division started out rough and there was no real sense of where it was gonna go. But as time has went on, both the division and these performers have grown leaps and bounds to point where women are on the marquee, women can be the draw. More than any feud, this demonstrates why we love wrestling. We love seeing the good guys win. And for Divas fans, this was the zenith. This was the promised land. Two women getting the chance to tell a story over the course of two years of their quest to become champion and the challenges of staying true to your morals like Bayley, or throwing them away in the name of success like Sasha Banks. Bayley took the road less traveled and that has made all the difference, and now she is the woman to beat.