WSU Returns This Weekend with First Show Under New Ownership 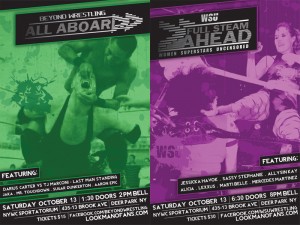 Women Superstars Uncensored will return to action this weekend with its first show since June’s Uncensored Rumble.

The gap between June and October may seem unusually large for the promotion, which is known for its regularity in promoting events, but the gap is due to WSU’s change in ownership.

As previously reported, Sean McCaffrey gave up the reins to the folks behind Beyond Wrestling.

WSU will present its first full show, partnering up with its new sibling promotion, for a double header this weekend in Deer Park, New York.

Despite the new owners, the cast of characters remains largely the same and WSU will pick up where it left off: Jessicka Havok will defend the WSU World Title against Alicia and Lexxus in a three-way bout following the events of June’s Uncensored Rumble Internet pay per view.

As well as full cards from Beyond Wrestling and WSU, the promotions will tape intergender matches in between tapings pitting WSU’s toughest females against Beyond’s toughest males.

Details for the show below:

***Three “Beyond vs. WSU” matches will be taped in between live events.***
The only way to see these matches live is to get a combination ticket in advance.

*First Time Ever In WSU*
Mercedes Martinez vs. LuFisto

Plus more to be announced!