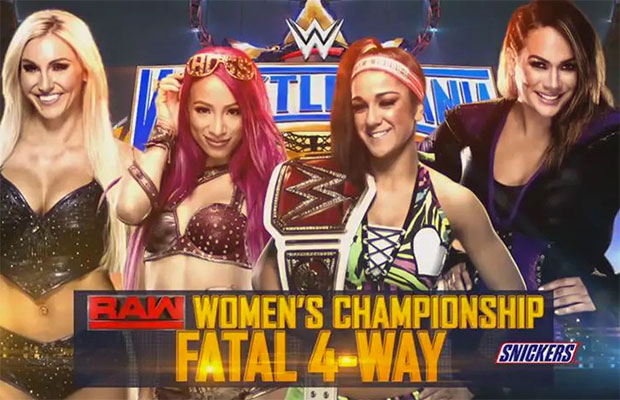 Hours before the final RAW before Wrestlemania, WWE announced a stipulation for the Fatal Four Way Women’s Title contest.

WWE’s Mike Rome took to Twitter to announce that the match will be an elimination contest!

This means that in order for the winner to be decided, three women will have to be tapped out/submitted, one after the after. After each pinfall/submission, the losing contestant will have to vacate the ring.

The full video can be seen below:

With this news, speculation is bound to occur regarding the final two contestants. And with WWE pushing the relationship between Banks and the champ so much, could these two be the final members on screen?

During the RAW after Fastlane, Stephanie McMahon stated that due to the controversy of Sasha Banks cheating to give Bayley the win, Flair required a “proper rematch”, and therefore would receive it at Wrestlemania.

Banks then earned her spot the same night as she beat the champ in a Singles contest.

Nia Jax then got involved after defeating Bayley last week.

Tune in to RAW tonight to find out how the story unfolds on the final stop for the red team on the road to Wrestlemania!

Are you a fan of this stipulation? What order do you predict each woman will be eliminated? Who are you rooting for? Let us know your views in the comments below!