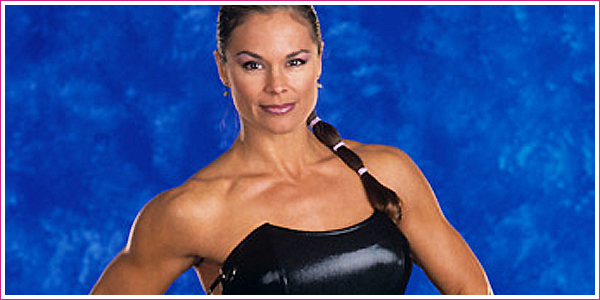 Yesterday, we had a post about Jazz resurfacing and now today, another former Women’s Champion has resurfaced in Ivory! WWE.com caught up with the three time Women’s Champ for their ‘Where Are They Now?’ feature. In the first part of a two parter, Ivory talks about her origins in the industry working for Gorgeous Ladies of Wrestling (GLOW) as Tina Ferrari:

“It’s so hard to watch the footage because we were all so lame at what we did,” recalled the future Ivory. “We didn’t have any trainers. We pretty much figured it all out by watching men’s wrestling.

“We didn’t have anybody in Vegas. We just had videos and ring time — on a boxing mat mind you, not even a wrestling ring. The thing was stiffer than stiff, like wrestling in your living room or on plywood.”

“We were all really young and had a lot of creative freedom, which was really cool. It was like it was our show,” Moretti explained of G.L.O.W.. “Let’s do this outright, put our costumes on, and really get this thing sold, bring people in.”

Read the rest by clicking here. No talk of her 6 year WWE run in this part, that will be discussed in tomorrow’s second half of the article.

It’s nice to see WWE reaching out to a Diva that really did a lot for the company but is often forgotten, because we tend to concentrate on Trish, Lita and Victoria. No one can forget Ivory’s classic feud with The Fabulous Moolah and there were some truly memorable moments in Ivory’s WWE run including ‘injuring’ Chyna and being part of Right to Censor. And she also had a fairly successful run as a broadcaster for the company too. Mending bridges with WWE could be the first step to Ivory becoming an official member of the WWE Alumni, which would be great to see. WWE Alumni is usually the first step towards the Hall of Fame.

Do you think she’s HOF material?