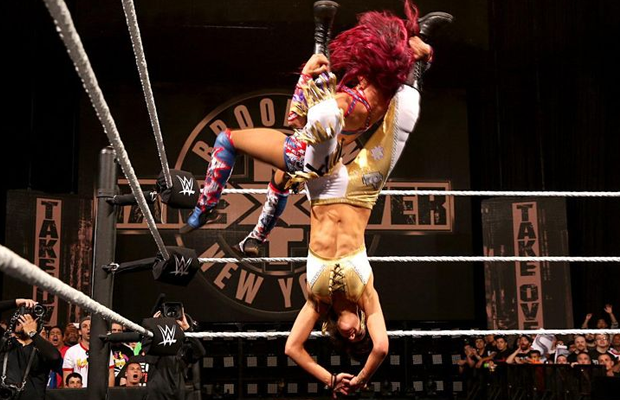 WWE.com has compiled a list of its top 10 Diva matches of all time, honoring many acclaimed bouts from the past few years.

Topping the list is Bayley and Sasha Banks‘s NXT Women’s Title match at NXT TakeOver: Brooklyn, the bout that awarded Bayley the title and lead to its much-hyped rematch in the main event of NXT TakeOver: RESPECT.

The article explained their choice in saying that the match doesn’t need “years of reflection” for it to be confirmed as the greatest of all time:

Too often in this social media age do viewers become prisoners of the moment. Audiences see something they find enjoyable, immediately get swept up, declare it as the “greatest ever,” and then, with the passage of time, realize they may have been somewhat knee-jerk. It happens all the time — but it won’t with Sasha Banks and Bayley’s Women’s Championship Match from NXT: TakeOver: Brooklyn. No years of reflection are needed with this one; it really was that good.

Yes, Bayley won the contest and the championship in an absolute thriller, but to strictly classify the contest as an underdog triumph would be a disservice to the greater significance of the evening.

In an amazing post-match scene, Charlotte and Becky Lynch rushed to the ring to embrace with Bayley and Banks. The NXT Universe remained steadfast on their feet to heap ample praise to both the match and the Four Horsewomen themselves. In that precise moment, it all became definitive — the revolution was here, it was real and it had, indeed, been televised.

Also making the list were a number of other matches from NXT live specials, as well as intense rivalry bouts between AJ Lee and Kaitlyn; Brie Bella and Stephanie McMahon; and, of course, Lita and Trish Stratus.