WWE Hell in a Cell in Review: Lay-Cool Still Golden… Thanks to a Shoe 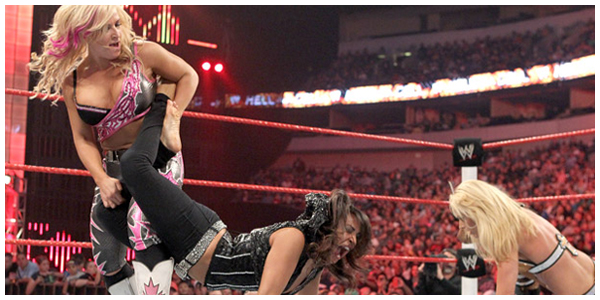 Last night, one half of the Unified Divas Champions, Michelle McCool defended her newly won title for the first time against the First Lady of The Hart Dynasty, Natalya, at Hell in a Cell. Fans have been waiting with bated breath for someone to end the reign of ‘The Flawless Ones’. Could Natalya be the Diva that takes them down a peg? Check out the match below:

Out first is the champion, Michelle (accompanied by Layla) and I must say, she is looking phenomenal in her new gold and black gear. Natalya is out next, also sporting some new gear. I’m a bigger fan of Natalya’s white gear, but this silver one is impressive as well. Natalya slaps hands with the fans, before climbing in the ring and posing for the fans. The two dominant Divas stare each other down and referee signals for the bell, starting the match.

Michelle goes to lock up, but Natalya evades and locks in a waistlock, followed by a takedown, before quickly slapping on a front chancery. Michelle manages to reverse the hold into a hammerlock, but is foiled yet again, as Natalya reverses it into a another waistlock. Sensing that Natalya has the upperhand, McCool scrambles towards the ropes, forcing a break. Michelle rolls out of the ring, asking for a time out, but Natalya isn’t having any of that. Natalya slides out of ring and chases Michelle around the ring. Ever the BFF, Layla throws herself in front of the charging Diva, only to be thrown aside, but giving Michelle the opportunity to lay Natalya out with a vicious clothesline.

Michelle throws Natalya into the security barricade before tossing her back into the ring, where she drives her knee into the third generation Diva’s lower back. The champ pulls Natalya to her feet, takes her over with a snapmere and locks in a bodyscissors from behind, wearing out the already injured back. Natalya manages to turn around in the hold and lift McCool off the mat and drives her into the turnbuckle to break the hold. Natalya immediately rolls McCool up with a rolling clutch pin, but the champ kicks out and goes right back to the bodyscissors submission, adding a chokehold for extra effect.

Sneaky as always, Michelle creeps to the ropes and grabs them to apply more leverage, but the referee catches her and makes her break. Michelle breaks the hold, but not getting in a cheap shot, kicking Natalya in the back. Michelle hauls her opponent to her feet once again and goes on the attack with several European uppercuts. She tries to whip Natalya across the ring, but Natalya counter with a back body drop, followed by a flurry of strikes. Natalya is briefly distracted by Layla on the outside, but quickly brings her attention back to Michelle and bring her down with a beautiful discus clothesline.

Natalya goes for the pin, but Layla jumps on the apron, distracting the referee. Fed up, Natalya grabs Layla by the hair, ready to permanently neutralize her. Michelle rushes in to help, but accidentally kicks Layla in the midsection, taking her out. Natalya uses the distraction to get the jump on Michelle, rolling her up. Unfortunately for her, the referee’s attention is still on Layla and by the time he realizes Natalya is pinning Michelle it’s too late; The champ kicks out at two.

Natalya tries to keep the pressure on Michelle, but Michelle lands a belly-to-belly slam for another nearfall. Frustrated, Michelle goes for the Faithbreaker, but blocks it, takes McCool down and locks in the Sharpshooter, sending the crowd into a frenzy. Michelle rolls through and reverses the Sharpshooter into a submission of her own, The MAD-T, better known as the heel hook. After a bit of struggling, Natalya rolls McCool over, locking in the Sharpshooter once again.

Sensing her shared gold was in danger, Layla take off her shoe and throws it at Natalya, causing McCool to lose the match, but retain the title. Unfortunately for Layla, Natalya isn’t too happy about this outcome. Natalya quickly grabs Layla and slaps the Sharpshooter on her as well. Michelle tries to attack and saved her friend, but Natalya lets go of the hold and chases them off, dodging Layla’s shoes all the while.

All in all, I was really impressed with this match. Like most Divas matches, it could have been longer, but I think all three of the ladies involved made the most of the time they were allotted. Both ladies showed a lot more chemistry than their previous outing, in my opinion, and both showed some impressive skills in the ring, including some decent chain wrestling, which we don’t see from the Divas much these days.

Like my colleagues said on last night’s Diva Dirt Live, both girls tried their best to get the crowd into the match, but they were stuck in the “cool down” spot, so crowd reaction was bound to be minimal. I have a feeling that these girls could have kicked puppies in the ring for 10 minutes and would have still failed to get a reaction after that huge Cena/Nexus twist just moments before.

Finally, the controversial ending of the match: I know a lot of people have been down on the match’s ending, including myself (I mean, really?! A shoe?! Really?!), but looking back, I’m glad the match was ruled a DQ, regardless of my feelings about the shoe debacle. The ending allows this feud to develop further over the next few week, instead of just being a one off match before moving on to the next feud.

While I had my reservations about the match beforehand and my criticisms afterward, I believe Michelle and Natalya put on a solid match, despite all the factors working against them. Hopefully, WWE (un)Creative can light a fire under this budding rivalry tonight on Raw and give us a match to remember at the next PPV.