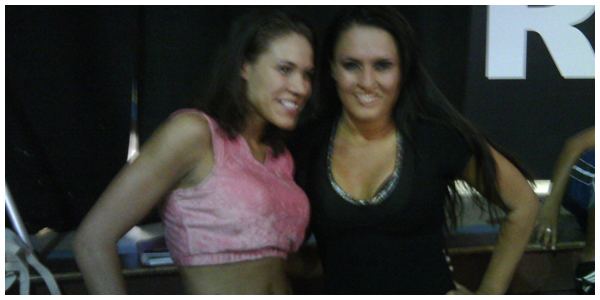 The world’s #3 and #4 ranked female wrestlers (courtesy of the PWI Female 50) faced off once again this past Saturday night at River City Wrestling in San Antonio, TX. RCW Heavyweight Champion, Alissa Flash (Cheerleader Melissa, ranked #4 on PWI Female 50 2010) and Mercedes Martinez (#3) headlined the event in a rematch to their bout last month. Diva Dirt reader, Brandon, sent in the following:

Coming off a big match last month, current RCW Champion Alissa Flash put the gold on the line once again against Mercedes Martinez, this time with no interference from Joey Spector (Mercedes’ boyfriend), the Texas Hitmen, and the Karate Kids.

The match, like last month, did not disappoint. The first third of the match had great exchange of holds from both Martinez and Flash, the striking game picked up in the second third of the match with Martinez’s strong-style chop to Flash exchange of strikes. One of my favorite moments was when Flash was attempting the Curb Stomp, Mercedes countered into a Curb Stomp of her own! The matched ended when both girls try to hit their finishers, up until Alissa Flash hits the Air Raid Crash on Mercedes for the win, thus retaining the RCW Championship. After the match, Flash wanted to extends the hand to Martinez, when Joey Spector shows up and tries to talk Merceds into not doing it and just walk away. Did Mercedes buy that? HELL TO THE NAW! Mercedes and Alissa exchange strikes to Spector and kick his hairy behind to the curb. Spector then said to Martinez, “It’s over!” Like Mercedes really cared for him, because early in the show, Spector kicked the Hitmen to the curb when they lost their match. The night end with Flash and Martinez raising arms and were acknowledged as PWI’s #3 and #4!

After the show, I talked with both girls. Alissa was very sweet and very humble, and for some reason, she thought I had a Twitter acount under Frank2437 or whatever. But that wasn’t me and I hardly touch Twitter. But it was cool. Alissa is great and I congratulated her on the PWI ranking, and asked her: “How does it feeling being as good as Michelle McCool and Angelina Love?” and Melissa started chuckling. Mercedes, on the other hand, comes across like a homegirl of mine. Very sweet and a total class act. Had a great talk with her about the current product and, like most people (myself included), she’s not feeling it. Especially NXT (she looks out for AJ Lee, who Mercedes helped show the ropes in WSU) and retiring the Women’s Championship, which she had strong feelings about. It’s like, she says, slapping the faces of all the women that held that prestigious belt and it’s legacy, to keep around, what Mercedes dubs “The Cartoon Belt,” regarding the Divas Title, which I laughed at because it does look like a cartoon (especially with Lay-Cool running with it). I even asked her if somebody is new to the WSU product, which DVD should I start with? She replied with anything from last year up to today with her battles with Angel Orsini and Rain, and others.

Overall, great night for independent wrestling in Texas. Melissa, Mercedes, and the other RCW wrestlers put on a great show (minus the bottom rope collapsing, but they continued on). Now I just wait for the next show to see who Alissa Flash will put the RCW Title on the line against. Maybe another great female talent, or a man, or maybe Spector’s lame-ass again. Whoever it is, Alissa Flash will be ready!