WWE Hell in a Cell Predictions: Eve vs Kaitlyn vs Layla 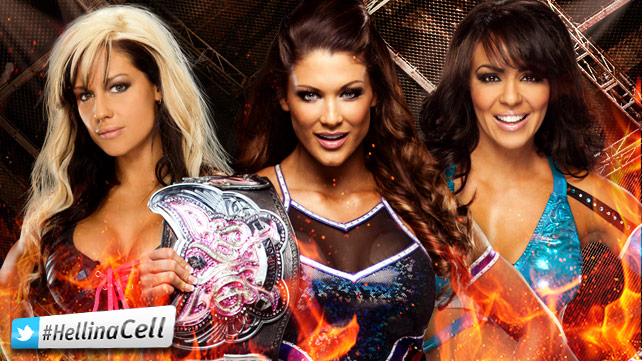 Tonight sees a three-way match for the Divas Title as Eve defends against Layla and Kaitlyn. Who will win? The Diva Dirt team weigh in…

Cryssi: This match is interesting to me because there are a ton of different scenarios and three equally interesting possible outcomes. I do feel like Eve will come out the winner (she’s already had the most interesting title run in ages), but seeing how these three work a triple threat is so appealing to me. I wasn’t going to order Hell In A Cell, but I feel like I have to give it a shot now. There’s just a lot going on right now that’s right for the Divas and I want to see it play out. Eve, Layla, and Kaitlyn will either be a disaster or it will be brilliant, and I’m banking on brilliant. I think Eve and Layla work great together, and I think this is the type of match Kaitlyn needs to continue improving. I’ve loved Kaitlyn since the first episode of NXT. She had ZERO experience and with time and effort she’s now in a storyline centered around the title. Slow and steady wins the race and I really see her having a big year next year. It just isn’t time for her yet.

Erin: Eve seems to have backed herself into a corner, and her chances look slim. That’s why I’m thinking she’s going to come out on top. All of her scheming, the “attacker” mystery, had been built up for a storyline that’s put her front and center. I just don’t see the WWE derailing that any time soon by taking away the title. Eve will either use the friends against each other or pull something (or someone) out of her bag of tricks to scheme her way to retaining her title. Eve wins.

Melanie: I could see WWE eventually pulling the trigger on Kaitlyn as Divas Champion, but I don’t think it’ll be tonight. Eve has had a great run since becoming champion and this is the most exciting the Divas division has been in quite some time. I’m actually enjoying the storyline. I see Eve picking up the win here, but Kaitlyn may very well be champion before the year is out.