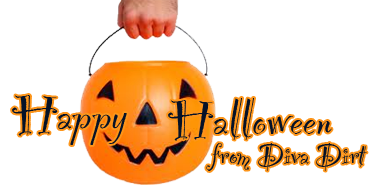 Happy Halloween! We’re continuing our yearly tradition of dreaming up Halloween costumes for the year’s most notable Divas and Knockouts. We’ll be mixing Knockouts and Divas together in three posts leading up to the big day. But before you see this year’s picks, be sure to catch up on the past 4 years of this feature (can you believe this is the 5th year we’ve done this?):

All caught up? Let’s get started! 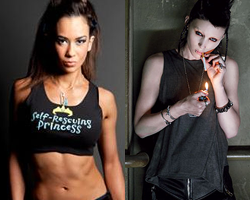 AJ Lee
Costume: Lisbeth Salander from 2011’s “The Girl With the Dragon Tattoo”.
Why?: We suggested Lisbeth as a costume back in 2010, but this different: Rooney Mara’s Lisbeth from last year’s American version is her own animal. She’s more antagonistic, more volatile. And, given the past year of AJ’s career, we think there’s plenty of reason to bring Lisbeth back. This year, a high profile main event storyline showcased AJ’s fragile hold on sanity and the unpredictable power she could wield. Hell, just cut her hair, put her in black leather, give her a few more piercings, bleach her eyebrows and she’s practically WWE’s own Lisbeth Salander.
Get the look: Put together an all (or mostly) black ensemble with a leather jacket, skinny jeans and motorcycle boots. Accessories should include piled-on rings and bracelets and fake nose, lip and eyebrow piercings. Top it off with a cropped black wig, dark eye makeup, a “take no shit” attitude and your best Swedish accent. 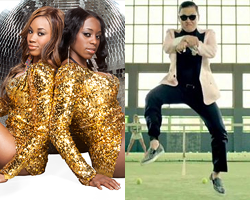 Cameron & Naomi (The Funkadactyls)
Costume: PSY, also known as the “Gangnam Style” guy.
Why?: The WWE’s resident dancing queens are the only ones fit to take on this year’s biggest dance hit. “Gangnam Style” came out of nowhere, and soon everyone from SNL to your grandmother was doing the dance. With or without Brodus Clay, the duo would be quite a sight in matching tuxedos, sunglasses and short wigs, busting out the well-known moves.
Get the look: Did you know there’s a whole website dedicated to putting together a PSY costume? Well, now you do. 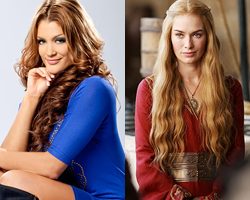 Eve Torres
Costume: Cersei Lannister from “Game of Thrones”.
Why?: Lately, Eve has become WWE’s resident master manipulator, scheming her way to a position of power and a Divas Title win. Such use of politics and wit to achieve her goals would make Westeros’s evil Queen (regent) proud. Eve just better hope her schemes doesn’t come back to bite her like they did to Cersei.
Get the look: You probably won’t pony up for this elaborate costume, but it should give you a good idea of how to dress: an elaborate dress in gold and red tones, long golden hair and some sort of lion insignia around your neck. 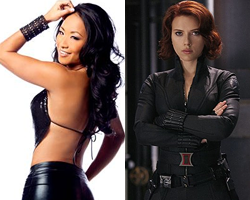 Gail Kim
Costume: Black Widow from this year’s “The Avengers”.
Why?: Few women in wrestling have as much or more agility than Gail, so it’s more than fitting to imagine her as a sexy, deadly assassin/superhero Black Widow. Heck, she’s already displayed her fighting skills in a movie–what more could you ask for?
Get the look: Grab a ready-made costume like this one or duplicate it yourself. 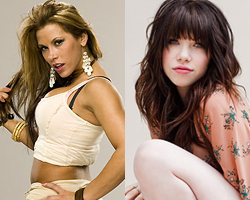 Mickie James
Costume: Carly Rae Jepsen.
Why?: Mickie’s music career is still going strong, and though she’s decidedly more “country” now, it wasn’t long ago that Mickie was the bubbliest Diva around. Why not combine those factors (song and bubbliness) to become this year’s biggest breakout pop star? We kind of itching to hear her take on “Call Me Maybe”.
Get the look: A dark wig with blunt bangs and trendy clothing would satisfy the looks, but the most important part is the voice: a high-pitched performance of “Call Me Maybe” would leave people in no doubt of who you are. 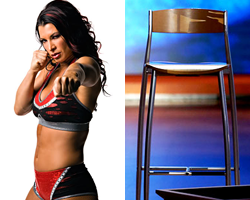 Tara
Costume: An empty chair (also known as “invisible Obama”).
Why?: We all know Tara’s the one who goes for the goofy, funny costumes. Undoubtedly, this year’s biggest goofy costume will be a riff on the infamous “Eastwooding” moment from this year’s Republican National Convention, where Clint Eastwood had a conversation with an empty chair supposedly seating an invisible President Barack Obama. All Tara would have to do is construct a large chair of out cardboard, make a hole for her face, and ta-da!
Get the look: Grab some cardboard and get to work.

Check back tomorrow for part 2!

Got any Diva or Knockout costume ideas of your own? Let us know in the comments!