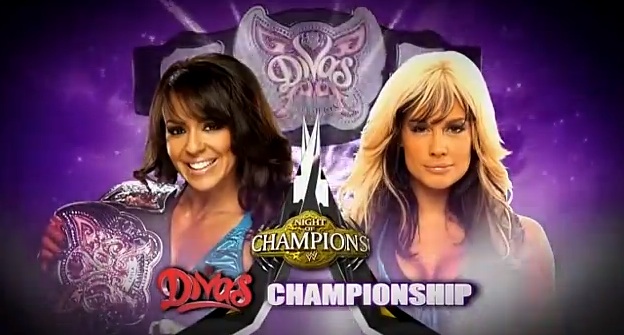 The WWE Divas Title is on the line tonight at Night of Champions as Layla defends against the rookie, Kaitlyn. Can she defeat the veteran Diva Search winner for the championship? And what role will Eve Torres play in the match?

The Diva Dirt team weighs in:

Bobby: I’m so excited for this match. I don’t even care how the build up has been, but I’m just excited period that Kaitlyn is getting an opportunity. She shined on NXT Redemption , and it’s nice to see her getting a reward down the road. This is the biggest match of my… I mean, her life and I strongly hope she somehow does end up winning. I’m not sure if I think she’s going to necessarily win or not based on how things have been going with Eve getting a lot of focus, but I feel like if I predict against her she will for sure lose so my vote goes to Kaitlyn. What can I say? I’m insanely superstitious…

Cryssi: For some reason it seems to me that this match will have some type of swerve and that might not necessarily be a bad idea. I’m not sure what type of match Kaitlyn and Layla can put on together, but I’m open-minded and willing to sit back and leave it be if that’s what’s written in the stars. I think we can all agree Eve will assert herself in some capacity, but I would rather it not be randomly in the match, giving her another random victory. So with all that rambling, I think Layla will win the match and will move to feud with Eve. If Eve gets in the match, then Eve will walk out as champion. Personally, I think Kaitlyn should have the belt. Is there a hashtag option for “all three”?

Erin: This is kind of hard to predict, since Eve is playing the wild card and we don’t really know what she’s going to do. I think it comes down to what best suits the plan she’s hatching. Hell, I’m just going to pull a swerve and say that neither Layla or Kaitlyn wins. Eve will somehow get this match turned into a triple threat and she will walk out Night of Champions with the belt.

Jake: I see Eve winning this somehow. I know what you’re thinking… Jake, she’s not in the match. I have a feeling all the games she’s been playing and “change of attitude” will see Booker T placing her in his making it a triple threat. Eve will walk out champ.

Katelyn: I literally can’t remember anything from Layla’s title run aside from her win (sadly) so I’m going to pick Kaitlyn. Also, she has a cool name.

Melanie: Firstly, WWE has done a pretty decent job building up this feud — obviously, there’s still room for improvement, but this match has had more emphasis on it on Raw and SmackDown than any other Divas Title match this year. Of course, the most intriguing factor is neither Kaitlyn, nor Layla, but Eve Torres. A lot of different theories are out there about what might happen (for example, Eve being a last minute addition and winning the match), but I’m of the mindset that Layla will retain due to interference from Eve, thus costing Kaitlyn the match and showing her true colors after playing nice for the past few weeks.

Steven: Normally, I would say that WWE is ready to pull the trigger on Kaitlyn. For the past few weeks since becoming #1 contender, WWE has really pushed her as a solid contender for the Divas Title. That being said, there is a wild card in this match to consider… Eve Torres. Eve has had her issues with both Layla and Kaitlyn in the past, so I fully expect her to interject herself in this match, and possibly cost Kaitlyn her shot at the title. Expect Layla to pick up the win tonight over Kaitlyn, but not by pinfall.