WWE Over the Limit in Review: Beth Comes Out Strong, But Layla Proves Herself as Champion 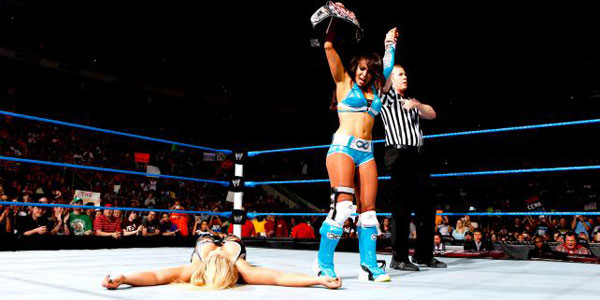 Greetings everybody, and welcome to the official one stop shop for WWE Over the Limit… Diva wise, that is. This year’s show brought forth what I believe to be the third female match to take place at said pay per view, and it was a doozy as Beth Phoenix challenged Divas Champion, Layla, with her coveted butterfly emblazoned title on the line. I’ve seen many remarks on Twitter regarding the match, but I’m sorry to say that the match was not the biggest of my concerns when the festivities got underway because… because… FINALLY the Glamasuit has come back to the WWE! It’s been a long time coming, but Miss Phoenix finally pulled the trigger and returned to the gear that has stuck true to her throughout most of her career. Now that that’s out of the way, let’s get started!

The Divas Title logo flashes on our screen as out walks our Glamasuit wearing Glamazon. She looks ready for business as she gracefully walks down the entrance ramp and flips into the ring. We are taken to a brief recap of the actions leading to this match regarding Layla’s return at last month’s Extreme Rules where she filled Beth’s spot in the Divas Title match. Following this comes Layla, who looks happy to be here and receives a SHUCKY DUCKY QUACK QUAAACCCKKKK from Booker T. Layla poses on the ropes as the bell sounds and we get things underway between the two ladies.

They lock up, as Layla takes the early advantage. Beth hoists her into the air, but this does not affect the hold. Phoenix sends Layla into the ropes and scores a fist to the face, before dragging the Divas Champ to the corner and blasting her face across the turnbuckle. From there, the challenger once again tosses Layla towards the ropes, but Layla comes back with an arm drag. She follows it up with a facebuster and refuses to let up on her competition. The champion is sent into the corner, where she flips off with a crossbody for a near fall. Baseball slide dropkick continues the pain, but only for another close call.

Beth sends Layla into the corner, but Layla fights back with an elbow and a few shots. Layla gets a leg up on Beth’s shoulder, but Phoenix hits an awesome move in which she drops Layla down in pain. From there, the challenger continues to target the injured leg with a few unique holds near the steel pole. We get a replay of what happened, as Beth slides Layla into the ring and takes her down by the injury yet again. Layla lets out a unique shriek, while the dominance of Beth Phoenix continues on.

She locks a half Boston Crab, sparking Layla to debate whether submitting is a possibility or not. Layla fights through the pain and kicks Beth towards the ropes. Phoenix bounces off them, as Layla then kicks her in the knee and scores a roll up to no avail. This comeback is short lived though, as Beth takes Layla into the ropes and continues to work over the knee. Phoenix hoists her competition up, but Layla scores with a dropkick to send Beth outside and buy some time.

Layla continues the fight and goes for a spin kick, but Beth ducks and lifts her up military press style. Layla then manages to just barely counter into a DDT. She slowly goes for the cover, but Beth kicks out at two. The champion with a bridge pin, but only two again. Beth lifts Layla up and backs her into the corner, where she proceeds to hoist her onto the top rope. Layla sets up for her awesome flipping stunner move, but she ends up landing on her feet and Beth goes for the Glam Slam! Layla rolls through, but Beth rolls back for a two count! Phoenix kicks Layla down at her knee, but Layla then hits the Lay-Out out of nowhere to retain the title!

Thoughts: I’m going to be honest and say that I’m probably the only person who was not really feeling the match. Don’t get me wrong, it was a good match and it got a lot of time, but I just felt… I don’t know, indifferent. Maybe it’s because I saw a lot of people saying how great it was that I was expecting more, but I thought there was some problems with their timing in a few parts. That’s to be expected though given that Layla has not had a match go this long since her return, so I’m not faulting anyone for it. I will say that I felt from Layla’s comeback to the end was great and I really did enjoy that part a lot. It was definitely one of the better Diva matches we’ve seen, but I feel like Layla and Beth could surpass it if given another shot together at the next pay per view.