WWE Over the Limit in Review: Karma (and Kharma) Take the Night Off 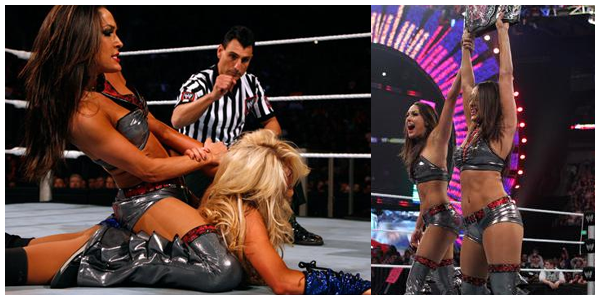 Given all the hubbub about Kharma‘s interactions with her fellow Divas in the past few weeks, it became almost a foregone conclusion that she would make her presence known during Brie Bella and Kelly Kelly‘s Divas Championship match. Surely, a PPV setting would be ripe for a big, showstopping demonstration of strength by Kharma. Yet, somehow, Kharma seemed to have better things to do, because the title match went off without any outside interference. Watch the match below and see for yourself:

Nikki Bella attempts to distract Kelly before the match even starts, and Kelly spares a look in her direction, allowing for Brie to gain the upper hand. She sends Kelly into the corner, but her attack is stopped short. Kelly seizes Brie by the neck with her legs, hanging over the ropes and choking her. Kelly eventually stops the attack at the ref’s request, only to sweep Brie’s legs out from under her for good measure. She enters the ring via the turnbuckle, hitting Brie with a flying crossbody. She goes for the pin, but Brie kicks out after the 1-count.

Brie cowers in the corner and Kelly immediately goes in for the attack.. er.. stinkface. That’s probably my least favorite move in wrestling, and has no place in a Divas Championship match, no matter what B-level PPV it’s on. Anyways, after rubbing her butt in Brie’s face, Kelly advances for another attack, but Brie ducks and boosts her over the ropes. Kelly lands on the apron, but a quick kick to the shins sends her all the way to the outside. Nikki, of course, smells blood in the water and goes in for the attack, kicking her between the shoulder blades while referee Nunzio is distracted by Brie. Kelly slowly tries to climb back into the ring, but Brie stamps on her foot, pulls her onto the apron, and hits a hotshot on the same arm. She drags Kelly into the ring and attempts a pin. Kelly kicks out at 2.

Brie takes hold of Kelly’s left arm again, straddling it and stomping to bring her weight down on it. She repeats the move before finally twisting it and slamming her down face-first onto the mat. She then climbs on Kelly’s back, wrenching her arm backwards in a submission that threatens to separate her shoulder. She holds on to the move while Kelly attempts to get a rope break, but before she can get too far Brie releases the hold and slams Kelly back onto the mat. She then regroups and puts Kelly back into the same hold. Kelly eventually battles back, getting to her feet and knocking Brie off of her.

Now at opposite ends of the ring, Brie charges at Kelly, aiming for a clothesline, but Kelly’s attack is more powerful and takes her down with a Lou Thesz press. Kelly goes on a stream of offense, clearly frustrated with Brie’s antics and playing a bit more dirty than she normally does, kicking Brie low and slamming her face to the mat rather than hitting the babyface onslaught of clotheslines and dropkicks. I like this side of Kelly, showing cracks in her super-sweet personality. She hits a bulldog and goes for the pin, Brie kicking out after the 2-count. Brie takes refuge in the lower ropes, perhaps looking for her sister, but Kelly is right on her, stomping on her against the ropes. This prompts the referee to scold Kelly, and while he’s distracted, Nikki slips in, assuming the role of Brie. I’m telling you, the WWE referees need a course on improving concentration… and peripheral vision, while we’re at it.

Nikki-as-Brie immediately kicks Kelly in the midsection, tossing her throat-first against the ropes and, on the rebound, hitting her with the X-factor. She pins Kelly, gets the 3-count and retains her sister’s title.

The twins celebrate and, as part of the charade, Nikki takes the title from the referee. Nikki seems quite fond of the belt, giving it kisses as she and Brie depart. It seems like something, if expanded upon, could be an interesting little complication in the Bellas’ relationship, but I won’t take it at more than face value. As is, Brie is still champ, and the title picture is, once again, uncertain. We’re no closer to figuring out where Kharma plays into all of this, much less Kelly’s role in it. Maybe tonight’s Raw will help shed some light on that, but I have to say that this match definitely didn’t go the way I expected it to. I figured Kelly would win and set up a feud with Kharma over the title, but with Brie still champ, it makes the situation a bit murkier. But hey, a little unpredictability can be a good thing.

As for the match itself, it wasn’t show-stopping, but it was a nice little Divas Championship match, especially for one announced so late and on such a small-time PPV. I like that it showed that Divas such as Kelly and the Bellas, ones who don’t typically get the high-profile PPV spots, can perform on the bigger stage when called to do so. It could have been a more exciting match, but I’m satisfied seeing that Kelly played the admirable underdog and, despite all her efforts, couldn’t overcome the ever-present 2-on-1 battle that is feuding with one of the Bellas. It’s a nice spin on the typical “babyface defies the odds” story and hopefully can progress into something more, depending on where Kharma ends up in all of this. She is, after all, the wild card. Let’s hope the WWE finally decides on how to play that wild card sometime soon.

While karma and Kharma took the night off for the Divas, karma certainly came around for Michael Cole. Not only was he forced to kiss Jerry Lawler’s foot, but also got a moonsault from former Divas Champion, Eve Torres, following months of heckling and interruptions during Divas matches.

Ahh. That feeling? Like a cool splash of water on a long summer’s day!