WWE Superstars Redux (August 11th, 2011): The Bigger They Are, The Harder They Fall… 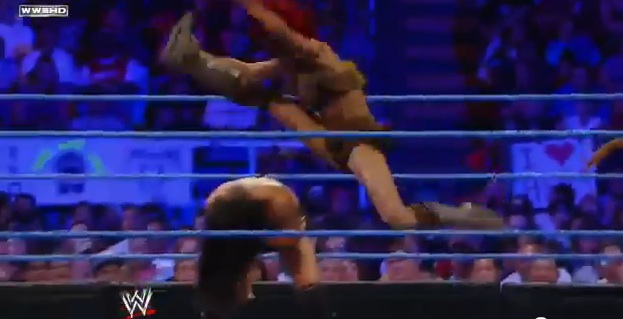 SmackDown’s Foxy Queen has certainly had a reign that makes all of the other Divas look like mince meat. Sadly, it means nothing because she’s not in a storyline. Still, the challengers keep coming and Alicia Fox keeps hitting them out of the ballpark.

Having taken out the likes of AJ, Kaitlyn and Natalya in various singles and tag matches, this week Foxy gets quite the workout in the much larger and more powerful Tamina.

Out first is the cocky, arrogant Ms Fox followed by the Superfly’s spawn, who has a very determined look on her face. Tamina is not playing.

A staredown ensues in the ring as the bell rings. The Divas go for a lock-up but Tamina shoves Fox. The sly Fox tries to shake it off, stroking her hair, working her swagger etc. Tamina talks some trash which does not make Alicia happy. This time they actually lock up and Fox hits a takedown on Tamina. Before Tamina can get to her feet, the quick, stealthy Fox channels her inner-Catwoman kicking Tamina in the face. Pin attempt by Fox but Tamina quickly kicks out.

The Divas get to their feet as Tamina shoves Fox into the corner and charges at her, but all she walks into is a back elbow. As Tamina attends to her face, Alicia blindsides her with a quick roll up attempt but again, no three count.

Tamina gets back up and quickly lays in a boot to Alicia’s midsection. The Samoan Princess attempts to intimidate Fox with fighting words before tossing her across the ring by her hair. Tamina begins overpowering Fox with boots wearing her down. She then chokes Fox over the middle rope. Tamina continues her control over Alicia by slamming her against the mat and applying a headlock. Alicia tries to break free, getting to her feet and hitting Tamina with elbows, but is once again slammed back down to the mat by her hair.

Tamina hits a running headbutt on Alicia, connecting with her midsection, and then lets out a smirk, admiring her handiwork. Tamina with a pin attempt now but Fox kicks out.

Another headlock submission by Tamina and again Alicia tries to break free. This time, Tamina strikes Alicia across the stomach with a knee and whips her against the ropes, however Alicia fires back with a clothesline. Seemingly finding a second wind, the momentum quickens as Alicia comes back with not one but two dropkicks — something we rarely see from Fox. The first dropkick was particularly superb. Another pin attempt but this time Tamina just flings her off of her with ease. Alicia with forearms. Irish whip attempt but Tamina reverses. Tamina goes for a back body drop but Alicia halts in her tracks and kicks Tamina in the face.

Alicia bounces off the ropes but Tamina manages to catch her and sets up a Samoan Drop but Alicia elbows her way out of it. Fox kicks Tamina across the back of her leg, cutting her down and setting her up for the scissors kick. Fox connects and it’s all over!

Thoughts: I didn’t enjoy this match as much I have previous matches on Superstars. I think it started off interestingly with Alicia showing off her swagger and not letting Tamina’s words get to her. Then it got kind of slow and plodding with the headlocks. Things then finally picked up in the end with Alicia’s comeback and win. I would say the match was so-so in terms of entertainment, but technically it was fine.

It’s rare to see Alicia as the underdog in a match and her be the one mounting a big comeback at the end. Usually it’s her opponent who makes the comeback. An interesting position for Alicia that saw her use moves we wouldn’t usually see from her i.e. dropkicks.

Foxy notches up another win. Who could she face next? I’m still waiting to see a singles match with AJ.