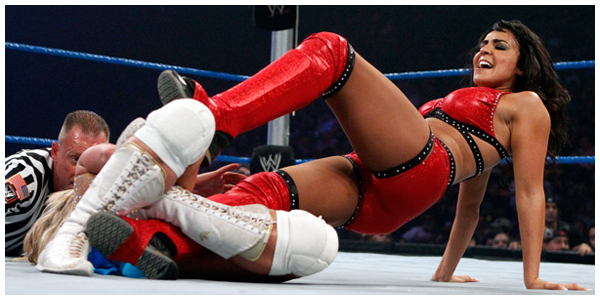 It came as a surprise to me to find out we had a Divas match on Superstars this week. I’m not complaining, however! Tonight we get one half of the Blondetourage, Tiffany taking on one half of Lay-Cool, Layla. Personally, I’m looking forward to see these two mix it up. Can Tiffany overcome the power of Lay-Cool? Watch below…

Out first is Tiffany, in a cute blue & yellow top and skirt. I have to say, the skirt is starting to grow on me. Next comes the self professed co-Women’s champions, Layla and Michelle McCool. Layla’s in her red gear, which I adore. Michelle’s sporting cut off shorts, a light blue ‘Flawless’ shirt and knee high boots. Normally I’m not a fan of ultra-short shorts but Michelle’s got the legs to pull them off.

The bell rings and the two go into a collar and elbow tieup. Layla slips behind Tiffany, clutching her by the waist. Tiffany applies her elbow to Layla’s wrist which causes the brunette to simply push Tiffany foward…and then she kneels down and fluffs up Tiffany’s skirt. Not gonna lie, I laughed. But this seems to get Tiffany riled up as she strikes with a knee to the gut, followed by some stiff forearms! She goes to whip Layla off the ropes but Layla reverses and Tiffany executes a nice looking sunset flip! It’s only good for two, but as they get to their feet and Layla rushes at her, Tiffany hits a very impressive arm drag. At this point, Layla scoots into a corner, holding her hands out to ward off Tiffany. But the blonde won’t be calmed down, she starts in on her opponent only to be physically held back by the referee. (They seem to do this a tad bit more for the women than for the men. I’ve seen them restrain the guys before but not nearly as often. Its as if they don’t want the women to be seen as too aggressive…)

In a flash, Layla’s up but she’s met by a forearm to the face, followed by Tiffany grabbing her arm in a lock. Layla reverses, however, working over Tiff’s arm until Tiffany flips forward and manages another reversal. Nice bit of chain wrestling here! All too rare. She continues to work over Layla’s arm until the brunette beauty manages to shove her into the ropes. Tiffany comes off them and hits Layla with a shoulderblock that sends Layla to the mat hard. She’s holding her head and as she sees Tiffany coming at her once more, she rolls to the outside. Tiffany follows, however, refusing to let up on Layla. As Layla tries to get a respite, leaning against the announcers table, Michelle comes up to comfort her. Tiffany (in one of the most hilarious moments of the matchup) SHOVES Michelle to the ground yelling, “Michelle get out of the way!” I about died! You GO girl, let that aggressiveness out! We hear Michelle exclaim, “Are you kidding me?!?” How dare Skirt Tiffany put her hands on the Flawless one?!

A kick to the gut on Layla is followed by Tiffany shoving her back into the ring. But as Layla distracts the referee and Tiffany climbs back onto the apron, Michelle nails a nasty kick to Tiffany’s left hamstring! Ow! Down goes Tiffany and Layla senses blood in the water. She has a very devious grin on her face as she just watches Tiffany moan in pain, clutching her leg. Michelle has her face close to Tiffany, mocking her. When the ref tells her to get out of the way, Michelle responds, “Her skirt’s in the way.” Too funny! Whoever said Michelle has no personality needs to listen to her lines in this match.

Back in the ring, Layla leisurely crawls over to Tiffany before getting to her feet and landing a hard kick to Tiffany’s hamstring. The referee backs her up, but while she keeps him distracted again, Michelle slams Tiffany’s leg against the corner of the ring.  Back on offense, Layla pulls Tiffany up to her feet, landing a forearm before twisting Tiffany’s leg around the middle rope, getting in a solid kick, then stretching it. Tiffany’s still got fight in her and she latches on to Layla’s throat, simultanously choking and getting in some hits to Layla’s chest. Layla stumbles away to get her breath but when she comes back at Tiffany she’s met with a kick to the midsection. Tiffany’s managed to get out of the corner but a kick to her leg sends her back down to the mat.

Layla scampers out of the ring and grabs Tiff’s leg, slamming it onto the ring’s edge. She grabs it again, seeking to repeat, but Tiffany kicks her away, buying enough time to roll into the ring, away from the edge. She’s actually up on her feet but Layla’s back in and cuts her back down with a forearm to her leg.  Grabbing the leg again, Layla gets a modified spinning toe hold on the injured limb. With a malicious look on her face, Layla ties up Tiffany’s legs into a modified Indian Death Lock! Very nice! She applies pressure, making Tiffany yell in pain. Tiffany refuses to give up, so in an excellent manuever, Layla rolls up Tiffany while still keeping her legs tied up in the death lock! She only gets two – Tiffany’s not ready to concede just yet!

Back up on her feet, Layla stalks Tiffany, leaning over to grab the blonde by her hair. This leaves her open to a nice kick to her head, which sends Layla reeling back. Layla tries again but gets two kicks to her own hamstring, the latter of which gets her down to the mat. Tiffany’s reviving, managing to climb to her feet and start in on those forearms to Layla’s midsection and face. The crowd’s starting to rally to Tiffany’s side as she shoves Layla into the corner, following up with a jumping (or as much as one can jump when her hamstring is still sore) clothesline, and a running bulldog that slams Layla’s face into the canvas. Layla’s head just bounces off the mat! Tiffany covers…good for two! The pain and fustration is evident on the blonde’s face as she shakily pulls Layla up to her feet. Kick to the midsection, then a HUGE suplex on Layla! Another cover, another two count. What’s she going to have to do to put the Women’s Champion away?

Tiffany’s up on her feet in the corner and Layla charges but is tripped up, her head bouncing off the second turnbuckle. Tiffany senses an opening and climbs up to the second rope. She launches herself off for a huge crossbody – but Layla scrambles out of the way, leaving Tiffany to eat canvas! As Michelle screams encouragement, Layla darts over, pulling Tiffany to her feet. She sets up the Layout and Tiffany takes it like a pro, lying prone. Layla gets the three count at last, screaming her happiness. Michelle’s quick to grab their titles and climb in the ring, hugging Layla as they celebrate a very hard fought victory.

VERY solid five minute match from these women! I can’t express how much I enjoyed this match. Both women showed aggression, stamina, ingenuity and power. Tiffany’s strength continues to impress me, along with her prowess in the ring. I love her aggression most of all. She’s so cute and friendly outside the ring but once that bell rings, she is ALL business. She’s not afraid to mix it up. Layla’s small but her speed, agility and adaptability make her a formidible opponent. That modified Indian deathlock was a treat to see, and her finisher (a reverse stunner) is so simple but effective – it looks like she could literally break someone’s neck. Layla’s title reign has been controversial, with the whole “co-women’s champions” thing, but on her own, I can easily see her dominating the division without Michelle’s help. (At least until a certain Firebird makes her return.) Kudos to both women, between this match and the match on Monday, it’s not been a bad week for WWE Divas’ fans!