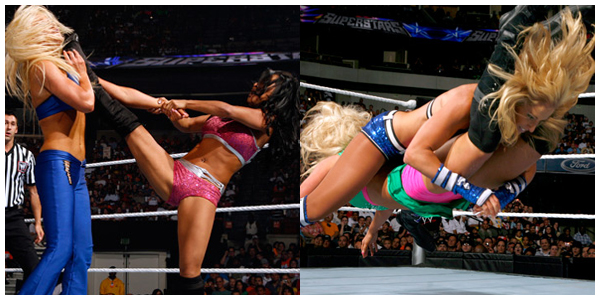 WWE gave us a double-whammy of Divas last night on WWE Superstars with Raw delivering Gail Kim vs Jillian and SmackDown offering up co-Women’s Champion, Michelle McCool vs Tiffany. Two matches from two different shows — this calls for a super-sized Redux with input from both our Raw columnist, Erin and SmackDown columnist, Melanie. Which brand had the better night?

Raw — by Erin
We start off the show with some Raw action, pitting Gail Kim against the woman she defeated on this show back in April, Jillian:

The match starts with a tie-up, Jillian backing Gail into a corner. she kicks her in the midsection and takes a moment to flaunt before turning back, but Gail slips out of her reach and flips over her, rolling her into a quick pin attempt, which earns her only a 1-count. Jillian, frustrated, gets to her feet quickly and slams Gail to the mat by the back of her head. She goes for a pin of her own, and Gail kicks out at 1.

Jillian whips Gail into the ropes, but on the return Gail turns the tables, latching onto Jillian’s midsection with her legs and rolling her forward into another pin attempt. Jillian kicks out. Gail goes on a rush of offense, nailing Jillian in the corner and then hitting a free-standing monkey flip. She dropkicks Jillian one last time, with sends her out of the ring. Jillian stumbles about outside, catching a breather. Unfortunately for her, Gail latches onto her neck with her legs, slipping through the ropes and hitting a hurricanrana outside the ring. Wow! I don’t think I’ve seen that done before. It’s creative, but doesn’t look as deliberate as it could have. To take full advantage of Gail’s moves, I think it’s vital to keep that unpredictable feeling in her matches and so far, this match has delivered that very nicely.

Jillian gets her revenge pretty quickly, though, pushing Gail so that she nails the ring apron face-first. She slips back into the ring and lounges a bit while Gail tries to shake away the cartoon birds flying around her head. She manages to get back inside the ring before the referee counts her out, but Jillian doesn’t give her a moment to recover, as she’s on her instantly, kicking her and slamming her face into the mat. She tries for a pin, but Gail kicks out at 2. Focusing on Gail’s loopy head, Jillian props her up against her knee, pulling her by her hair and knocking the back of her head against it. She lets go eventually but stays on Gail’s case, whipping her into the corner. Gail can barely stay vertical, though, and slams into the turnbuckle and falls back to the mat. Jillian senses Gail’s weariness and goes for yet another pin, getting only 2 again.

She brings Gail back against her knee and latches her into a headlock. The crowd starts to really get behind Gail, and she slowly gets to her feet and battles out of the hold. she elbows her way out and shoves Jillian away, going for another bodyscissors, but Jillian telegraphs it and lets Gail set herself up for a face plant. Jillian covers her, but Gail again kicks out at 2. Jillian is flabbergasted. She slaps her and tries again, but Gail kicks out even more vigorously this time, showing increased life. Jillian pulls her back into a hold punishing Gail’s head, jabbing her elbow into one of her temples and her knee in the other.

She lets go of Gail, hoisting her up and whipping her into the corner, setting up for a handspring elbow, belting out a flat note Tarzan-style before going for it. Gail jumps up, hooking her legs around Jillian’s neck and hitting a hurricanrana. Gail tries to get in a few blows on Jillian, but Jillian strong-arms her and slams her to the mat, her head again being jostled around. With Gail prone, Jillian goes for a cartwheel elbow, but is met with Gail’s knees instead. Gail keeps her momentum, nailing Jillian on her way through the ropes before scaling the turnbuckle. Jillian stops her in her tracks, taking control and hitting her with a top-rope suplex.

The move looks to have knocked the wind out of both Divas, as Jillian is slow to capitalize on the move. She eventually does get a cover on Gail, but Gail resiliently kicks out at 2. Jillian can’t believe it, but manages to thwart an attack from Gail and get her in a backslide pin, but Gail slips out of it rather quickly, pulling her to her feet and hitting the Eat Defeat. Gail gets the pin and the win.

What a fantastic match! The really played on the strengths of both Divas, with Jillian looking more vicious and malicious than usual, relentless in her attacks on Gail and calculating in focusing on her ailing head. She’ll likely always have that silly personality, but it’s nice to see her have some seriousness in the ring and really pull it off. You wouldn’t think that the girl who warbles pop songs for laughs could come off so intimidating in the ring, but she does.

Gail’s no slouch either, and her exciting, athletic maneuvers made the made unpredictable, exciting, and visually stunning. She utilizes them in a way that doesn’t make her look like a spot monkey, peppering in more basic, match-building moves that other Divas don’t and, as a result, lack real in-ring integrity. Her matches, as exciting and flashy as they are, are not *only* that. Gail mixes flash and substance in a way that makes her one of the top “must-watch” Divas in the company. Hell, both her and Jillian proved in this match that, given the right amount of time, they’re both “must-watch”. All it takes is a little effort from the boys backstage to give them the stage to perform, and these girls will put on a match that restores your faith in the division. I won’t say that one match can erase all the cynicism from my black little heart, but it does give me hope that, if the bookers are more generous and thoughtful in booking Diva matches and storylines, the Divas are more than capable of doing their part in giving us something fun to watch.

SmackDown — by Melanie
Following perhaps one of the best Divas matches of the year thus far, Michelle McCool and Tiffany had a tough act to follow. Let’s see how they fared…

The match starts with the co-Women’s Champ wrapping her arms around Tiffany’s waist, the fledgling Diva then counters on the McCool and wisely takes her down by the legs. Tiffany then follows through with a headlock as McCool gets to her feet and manages to get out of the hold and wrenches Tiffany’s arm behind her. The Divas again hit the mat and Tiffany manages to roll over and apply the same move on Michelle. Michelle applies a headlock as Tiffany counters by using her athletic prowess to do a headstand and then float over out of the lock. Very nice mat exchange here between the two Divas. Tiffany then jumps back over Michelle and goes for a cover but no dice. Very technical way to kick things off.

The two Divas exchange arm wrenches but Michelle gets the better of the exchange, grabbing Tiffany by the hair and throwing her out of the ring. With Tiffany propped up against the announce table, the vicious McCool hits her patented knee strike on Tiffany. Another great, intense spot. Tiffany winces on the outside while Michelle gets back into the ring as the referee begins a 10 count.

As Tiffany gets back into the ring but is struck across the back by an opportunistic Michelle, who then begins hitting knee strikes across her back. Michelle tries to drag Tiffany across the ring but Tiffany holds onto the ropes and Michelle, again rather viciously, stamps on her hand. Meanwhile on the outside, Layla is clapping away and exclaims: “I feel sorry for her.” Me too!

Michelle is ready to put Tiffany away and signals the Faith Breaker and whips herself against the ropes in Tiffany’s direction, but the young Diva — still hurting — tosses her overhead in a desperation move. She follows through with an atomic drop and a back elbow. Meanwhile, rather unfortunately, Miss Tiffany’s skirt has hiked up giving the fans a load of her pink panties. Ruh roh! From the corner, Tiffany now hits a monkey flip and then smashes Michelle by the head against the mat.

Tiffany kicks Michelle in the stomach and Michelle falls on her hands and knees, Tiffany whips herself off the ropes and goes for a sunset flip but Michelle rolls out of it and beautifully counters into the Faith Breaker for the 1, 2, 3.

Comparing it to the Raw Divas match, these two blondes really did have a tough act to follow and while I don’t think it could’ve topped Jillian vs Gail, this was a solid offering from SmackDown. I was particularly impressed with Michelle who I felt was on top form in terms of viciousness in the ring which really sells her heel character. The way she stamped on Tiffany’s hand to stop her from holding the ropes, the knee smash against the announce table — really intense and vicious heel-like moves from Michelle. I also really loved Michelle’s counter of Tiffany’s sunset flip into the Faith Breaker. This girl is really good at coming up with unique and interesting ways of seguing into her finisher. Usually, it’s kind of predictable when a girl is gonna hit her finisher — to use Kelly Kelly as an example, her opponent is usually on all fours and you know that the move is going to happen. Meanwhile with Michelle, she manages to come up with unique ways to fluidly go from a move into her finisher and it looks surprising and feels ‘real’, like it’s been hit out of nowhere.

As always, Tiffany was impressive, really stepping up against Michelle and not acting intimidated. You’d never tell that she is as new to the ring as she is, because she sells that ring presence so well. I know WWE considers Kelly the star power but hopefully they’ll give Tiffany the opportunity to take the lead in this brewing tag team feud.

What did you think? What match did you prefer? Comment below!