WWE Superstars Redux (March 1st, 2012): Beth Slams the Glam Out of the Fox 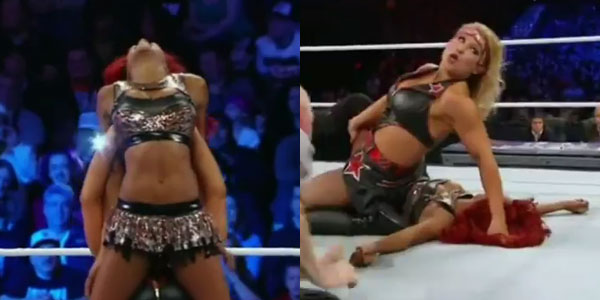 What’s up everybody? Let me be the first to welcome you to another scintillating edition of the Superstars Redux. WWE’s secondary program has seemed to be highlighting the Divas more and more as of late, and this week was no exception as our reigning Divas Champion, Beth Phoenix, squared off in singles competition against one of the many highlights of SmackDown and NXT, Alicia Fox! Will the Ding, Glamslam, Ding tour continue on? Let’s scroll down and find out!

We head to the arena, where PA-PA-PA-PARRTTAAYYY hits the sound system and out walks the Foxy one in her finest Fancy Fox Hood. Alicia poses for the cameras a bit, as we return from a brief commercial break to hear the royal theme of the Glamazon. Beth Phoenix walks out with her title displayed ever so proudly, claiming that she will be the Divas Champion forever! Beth flips into the ring and hands her title over as the bell sounds and we get started with a lock up. Beth backs Alicia into the ropes and proceeds to unload on her with a few strikes.

Beth then drags Alicia to the center of the ring and hits a huge bodyslam, before taunting the cameras that this will be another case of “Ding. Glamslam. Ding”. She hoists Foxy up and goes for her finisher, but Alicia fights out and tries to mount a comeback. Beth takes her down a notch with a huge clothesline, before going for a few strikes and a nearfall. She screams “HOW DARE YOU” to the referee and fans, as she drops Alicia to the floor a few times by the hair. Scott Stanford plugs that Beth would love to defend the Divas Title at WrestleMania if she can find the competition. (Ring Natalya Up!)

Beth goes for another near fall and locks in a submission hold. Alicia tries to fight out, as Scott now starts to plug how he tried to find Natalya and get her comments on Beth’s feelings that there are no worthy challengers for the Divas Title…please god make this happen. Phoenix sends Fox into the corner, but Alicia leaps up and goes for a split legged sunset flip. Beth stops the move from continuing on, however Alicia rolls out of the way as she tries to stomp on that Foxy paw.

Fox connects with a few strikes to the face, before matrixing back to avoid a clothesline! Alicia then scores with a huge dropkick and takes the fight to Phoenix in the corner. Beth sends Fox into the opposing turnbuckle, but Alicia leaps onto the second rope and jumps back with an elbow to the face for a near fall. This seems to frustrate our Fox, as she leans back and lets out a huge, yet still amusing, scream. From there, she charges off the ropes and goes for the Scissors Kick, but Beth moves out of the way and drops her with the Glamslam for the victory!

Thoughts: A solid outing for Beth and Alicia. I think it was a little shorter than most Superstars matches for the Divas, but since they’re building Beth up to be a big threat, it’s understandable. I like that they at least gave Alicia some offense so it wasn’t just a quick squash match, but I really really hope what Scott Stanford was talking about comes to fruition involving Beth and Natalya. I know commentary on Superstars is hardly anything to go by, but dang it, it’s all I have right now and I want Natalya on the WrestleMania card!