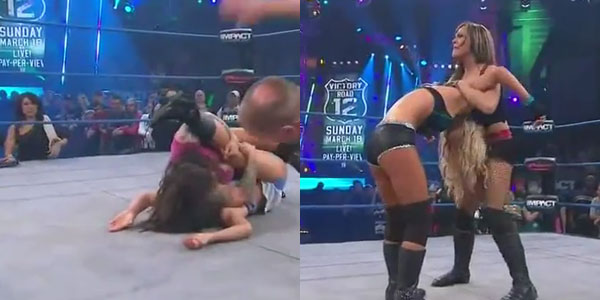 Hola everyone and welcome to another rousing edition of the Impact Write-Up. This week, we were treated to not just one, but two matches involving the Knockouts of Impact Wrestling! The first up pits ODB against the number one contender to Gail Kim‘s Knockouts Title, Madison Rayne, and the second shows off some tag team strengths as Mickie James and Velvet Sky face off against the unique duo of Angelina Love and Sarita. Who will emerge victorious in these matches? Or perhaps the better question to ask is will I be able to completely form a sentence while finally seeing Sarita wrestle on Impact? Time will tell, but for now, let’s get started.

Up first, we head backstage and find Madison Rayne with a blown up framed image of a Gail Kim trading card. She proceeds to hang it on a nearby wall, which sparks the Knockouts Champion to enter the room and ask what’s going on. Madison explains her actions, in that these are a gift for her over the top actions last week. Gail claims she has done the same, by getting Madison a spa day tomorrow with the girls. Kim then explains the spa day can’t happen tonight because she also got Madison a match with ODB tonight. Madison doesn’t seem too pleased, but Gail heads off to leave her partner so she can get ready.

Out to the ring we go with the KILLLLERRRRRRRR QUEEEEEEENNNNNNNN accompanied by Gail Kim. The two walk down the ramp, seemingly with different expressions on their face. As Taz tries to discuss wanting slow motion shots of his co worker, the spunky music of ODB hits and out she comes. The pyro seems to scare her, which I find somewhat amusing, as she proceeds to enter the ring and execute her usual taunting. The bell sounds, as the two ladies circle around the ring and kick things off with a knee to the stomach by Madison.

Rayne backs ODB into the ropes and briefly chokes her, before going towards an Irish Whip attempt that gets countered into a chest bump by ODB. Madison tries to hightail it out of the ring, but ODB drags her into the corner and punches her in the chest. From there, she takes the Killer Queen to the other side and uniquely bangs her head into all three turnbuckles. ODB backs up and goes for the Bronco Buster, but Madison smartly puts her boot up onto ODB’s bottom and kicks her back. After a replay, we see Rayne applying a choke lock on ODB until it’s countered. Madison continues the assault with an elbow to take ODB down, before setting up for the Rayne Drop.

Thankfully for ODB, she manages to counter out and drop Madison with a clothesline. Both women get to their feet, but it’s ODB to take the advantage with a few kicks. Madison gets backed into the corner and met with a running splash from her competition, as ODB follows it up with a few forearms and a clothesline in her big comeback. From there, ODB finally connects with the Bronco Buster and sets up for the BAM, but Madison counters out. Gail tries to get onto the ring apron for something, but I’m not quite sure what and before you know it, ODB drops Madison with the BAM and gets the big victory. Madison and Gail seem none to happy with one another, as Gail claims she accidentally dropped the title while trying to hand it to her when the referee’s back was turned. She amazingly makes the notion that she “hearts” Madison, but Rayne does not look amused.

Backstage we go once again, this time to see Velvet Sky spitting out curse words to a nearby camera man during an interview, much to my approval. She discusses that she has paid her dues long enough in this company for someone to just be screwing her over. Suddenly, the unlikely duo of Sarita and Angelina Love step out of a nearby locker room in unison and chant “wah wah wah poor Velvet”, before shoving her to the ground. Sky tries to shove them back, as a war breaks loose.

We then jump ahead to a new segment, which I’m not sure if these aired separately during the show or not, but I’m guessing that’s the case. Anyways, Velvet is now speaking about how she got screwed out of the battle royal a few weeks ago by Madison Rayne. Sky reiterates how sick she is of people trying to take her out of title contention and we are now taken to the exact same thing we just saw…okay now I get it. The first one was a highlight/preview of the full segment to come. Nonetheless, Velvet ends up beating down the two ladies, until Angelina shoves her to the floor and the two slam Sky into a wall. Suddenly, Angelina points to something and the two absolutely destroy Velvet by throwing her against an even bigger wall. Super Mickie comes running to the rescue in her finest march madness gear, as the two evil ladies back up and James checks on her tag team partner.

Out to the ring we go again, as Taz probably salivates ringside due to the panned up shot we get of Christy Hemme to open the segment. She announces the following tag team match, and out walks both Sarita (complete with trademarked soccer mom dancing) and Angelina Love. I guess Rosita and Winter were too busy? The two step into the ring as I can’t take my eyes off finally seeing Sarita on TV again. Following their entrance comes HARRRRRDDCCCCURRRRR COUNNTREEEHHHHH Mickie James! Velvet Sky erupts out from the back next, simply charging right by poor Mickie as she makes pigeon wing flap motions.

Velvet ducks a clothesline by Sarita and spears Angelina to the ground, as Mickie tosses Sarita to the ground. The bell sounds, with Angelina drops Velvet by the hair, as Mike Tenay continues his new weekly tradition of trying to sound “hip and groovy” by talking about TMZ stories during Knockout matches. Velvet throws Angelina down with a hair mare, as she then tags in Mickie James and tosses Angelina into the corner where Mickie drops her with a Mick-A-Rana. James follows it up with a dropkick for a two count, before Angelina fights out and tags Sarita in. Mickie connects with the flapjack into a kip up, but Sarita attacks her and backs her into the corner.

She levels James with a few strikes and distracts the referee as Angelina tries to deck Mickie, only James counters and knocks Angelina off the ring apron. She fights back to Sarita with some chops to the face. James ducks a clothesline attempt and knocks Sarita down with a snapmare, but as she goes for the front dropkick, Angelina holds the rope down and Mickie falls to the outside. Sarita proceeds to run off the ropes and leap outside the ring with a beautiful suicide dive! As Velvet keeps the referee busy inadvertently, Sarita and Angelina double team Mickie but only muster up a few two counts.

Angelina tags back in and kicks Mickie in the stomach before dragging her to the corner and locking in a boot choke to the back of the head. Mickie tries to fight off both women, but ultimately faces harm with a sidewalk slam. Tag back into Sarita, who locks in an amazing submission. Why isn’t this woman in the Knockouts Title picture? Mickie fights out of it and kicks her in the face, but Sarita drops James with an elbow before she can tag to Velvet. Sarita then misses a splash and Mickie connects with a roll up for a quick two. The two ladies get to both feet as Sarita levels her with a clothesline and performs another beautiful rendition of the soccer mom dance!

Off the ropes she goes, as she tries to attempt a handspring type maneuver that Mickie counters into a back suplex! Taz now begins to cheat on Christy Hemme by wanting slow camera angles of another female co worker, this time in Velvet Sky, who finally gets the tag along with Angelina. Velvet takes Sarita out, before decking Angelina with a multitude of clotheslines. Sky with the spinning neck drop (best thing I could come up with), as Sarita takes down Mickie. The two go for a double team move, but Velvet kicks Love in the face and hits Sarita with a stunner as Mickie ascends to the top rope.

Sarita turns right around into a Louise Thesz Press, as the two roll outside the ring. Back inside, Angelina goes for the botox injection, but Velvet counters into the Sky High! Mickie holds Sarita back, as Sky attains the three count. Mickie returns back to her own version of Sarita’s Soccer Mom Dances by flapping the pigeon wings once again, as Velvet tries to be the cool kid on the block by not joining her in the rousing performance. Sarita and Angelina make their way to the back, as Sky and James celebrate their big victory.

Thoughts: A fun night for Impact Wrestling. I thought both matches were very solid and I especially love that they’re FINALLY bringing Sarita back into the mix, even if its at the expense of my other favorite, Winter. Madison and Gail’s story is coming off very well, and to be honest I don’t even know if Gail purposely meant to fall from the ring apron or not, which is a testament to her when even the audience doesn’t know. I’m so glad she added the line at the end about how she was sorry and didn’t mean to drop the belt because it put so much more into the story. Definitely looking forward to seeing them square off together.

I don’t know where this Velvet storyline is going since she does always seem to get some type of focus when she’s not Champion. I do want her to get a lengthy reign sometime this year, and I like that she’s getting involved with some of the other Knockouts while Gail and Madison participate in the main feud. I have absolutely no idea why Angelina and Sarita have joined forces, but I kind of liked them together. Oh and did I mention how great it was to see Sarita back on TV in a wrestling capacity?