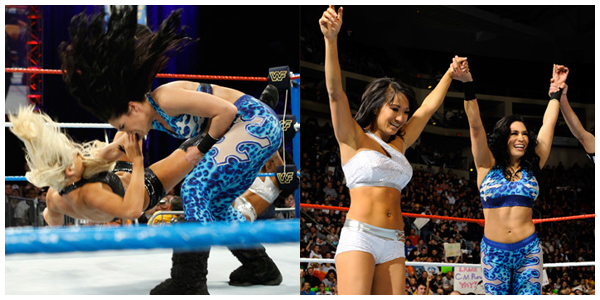 For the Superstars main event last night, we had the Divas taking center stage! It was be the team of Gail Kim and Melina taking on Alicia Fox and Maryse. Can Galina prevail, or will the Fox and the Minx get the win?

Out first is Melina in a blue attire, and we have the awesomely awesome CM Punk on commentary. I approve. But here we fade to commercial, and when we return, Gail Kim is already in the ring, chatting with Melina. She’s in her usual gear, white coloured this time, and it looks very nice on her. Last out are Alicia Fox (in her black WrestleMania gear) and Maryse (also in black). We’re starting out with Melina and Alicia. The two lockup and Melina hits a nice split leg armdrag, followed by a dropkick. Alicia’s in the ropes, so Melina hits her running knee strike to the back and goes for a pin. The ref counts two.

Melina hauls Alicia to her feet and backs into her corner, allowing Gail to tag herself in. Melina hits a snapmare, Gail hits a nice dropkick and goes for another pin, this time only getting one. Gail gets Alicia up to her feet, but Alicia counters, getting in some forearm shots. She tries for a northern lights suplex, but both times Gail counters, the second time countering into a sunset flip into a pin. Alicia gets a shoulder up at one. Back up, Alicia charges but Gail hits a huge armdrag, tossing Alicia towards her corner. She takes the opportunity to tag Maryse in, who’s met with a dropkick and a flurry of offense. They wind up in the corner, Gail on the apron, when Fox attempts to interfere. Gail knocks her off the apron, but Fox tries again and gets a huge hurricanrana onto the floor for her troubles!

As Gail re-enters the ring, Maryse grabs her by the neck and flips her over headfirst so that she hits the ring on her back hard. Maryse goes for a very lazy cover that Gail kicks out at two. She pulls Kim up, slamming her head into the turnbuckle of her own corner, screaming at Alicia to get back up. Fox does so, getting tagged in, while Maryse hits a snapmare. Both women grab Gail by the arms and legs, toss her up and back down to the mat forcefully. Alicia goes for a cover, gets a two count. Both get back to their feet, Alicia hitting a hard clothesline on Gail. She grabs the brunette by the leg and pulls her over to her corner, tagging in Maryse once more. Maryse kicks Kim in the stomach, goes for another lazy cover and gets only one.

Tagging Alicia back in, Maryse’s parting gift to Gail is to slam her face first into the mat. Alicia puts Gail into a sleeper, but she manages to fight out of it with elbows to the stomach. She turns towards Melina, but A Fox grabs her by the hair, slamming her back down. Alicia gathers Gail back up, going for another clothesline, but Kim counters into a hard reverse neckbreaker. Both women make for their corners and tag in their partners. Melina uses the matrix move to avoid Maryse’s clothesline and goes on the attack, hitting nice forearms and a flying leg lariat. Maryse whips her into the corner, but when she charges, Melina hits her with both boots, pushing her back. She climbs the turnbuckle and hits a Lou Thez into a cover, which Alicia promptly breaks up with a stiff kick to Melina’s head. Gail’s right there, however, getting a flying clothesline on Alicia to take her out of the ring. Maryse is up and goes for a kick to Melina’s head, but Melina grabs her leg, rolls her up and despite all of Maryse’s squirming and screaming, the referee counts three! Your winners: the team of Gail Kim and Melina! Both women hug each other in the ring as the crowd stands and applauds their efforts.

Musings: This is why I like Superstars, you mostly get longer matches, and thus a chance to shine brighter. For whatever reason, I like the team of Galina, and could see them as a proper tag team. They mesh together very well. Not so the team of Alicia and Maryse, those two don’t see eye to eye and it showed. Plus, Maryse hardly did any ring work, but that’s par for the course these days. I would just make her a full time manager and keep her out of the ring except for rare mixed tag matches. Her character is better than her wrestling. Alicia worked very well with both Gail and Melina tonight. Great job from all four women, it was an enjoyable match!