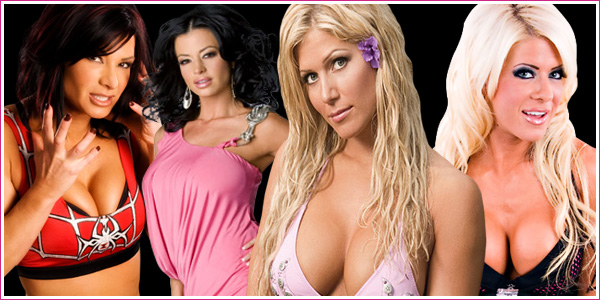 There’s a bunch of Divas and Knockout news that has made its way online, but each tidbit is not really big enough news to warrant an entire post. That said, I thought I’d post a potentially new feature called a News Quickie to keep all our devoted Diva Dirt fans well-rounded in their news.

– At the WrestleMania weekend Axxess events, it was noted that Raw Diva Candice Michelle was asked about her return to the ring. She reportedly shot down the rumors of her release again and said that she will be back in the ring and ready to compete within 3 weeks. Can’t wait that long? Catch Candice on The Wizards of Waverly Place this weekend on the Disney Channel. Sorry, I couldn’t resist posting that!

– Spotted: TNA President Dixie Carter schmoozing retired WWE Diva Victoria at a UFC event. That’s right, Victoria was in attendance at a UFC event, presumably to watch and take notes for her possible career in MMA. This is when Dixie approached Victoria about coming to TNA. There is definitely interest in bringing Victoria to TNA, and although I think it would be a bad move, I don’t even see it happening. Victoria has her sights set on MMA and I think she’s going to stick with that direction. No word on what Victoria responded back to Dixie Carter, but ultimately it will depend on what kind of contract she signed with WWE and when her no-compete clause finishes.

– Todd Grisham will take over as commentator on SmackDown while Josh Matthews takes his spot on ECW. So much for bringing in a female voice like Sunny to change things up a bit.

– Ex-WWE Diva “Desperate” Debra (new catchphrase alert! Melanie, we should do this more often!) is embarking on a radio tour across the country in an effort to rally fans to get TNA to sign her. I don’t know why she’d go on a radio tour; you have to have a lot to talk about to sit on the radio. How much can Debra say to a mostly-male audience other than that she used to be married to Stone Cold Steve Austin?

– Good Ol’ JR’s Blog addressed the Divas Battle Royal at WrestleMania. Good news from this is that JR seems to agree with us Diva fans when we kindly put that the match was a complete clusterf*ck (as Erin simply put). Here’s what JR said:

The Diva Battle Royal at ‘Mania was the darnedest thing I can remember seeing in a while as the ladies started scuffling before the bell rang and I swear that there were eliminations during the introductions. I was looking forward to seeing some of the Diva Alums…not only did I not see some of them in the match I did not get to see some of them during the week… I especially missed not getting to visit with Torrie Wilson. Hey, just because I’m on a “diet” doesn’t mean I can’t look at the “desert list.” Plus she always entertainingly busts my chops about her Boise State footballers upsetting Oklahoma a couple of years ago in the instant classic, Fiesta Bowl.

I did get to visit with Sunny, Nidia, and Molly Holly and thoroughly enjoyed those conversations. Nidia did not compete in the Battle Royal as she is busy being a mom but looked to be in tremendous shape. Sunny was having fun in Houston and Molly is still doing great things with under privileged kids. I’ve never met a Diva with a better heart for wanting to do good deeds than does Molly. I wish more people in this world had her wonderful attitude.

– In attendance at Booker T’s “Fight For the Kids” charity event this past weekend were TNA Knockouts Christy Hemme, Angelina Love, Velvet Sky, Sharmell, as well as Debra, Kim Page, and a jet-black haired Lita. It is still unknown if Booker T will continue seeking legal action against the WWE for “stealing” his other talents that were scheduled to appear, namely Torrie Wilson.

– UPDATE: TNA officials are not going to hold off on Ayako Hamada‘s debut. TNA was deciding between Sarah Stock and Ayako as their new Knockout, and they are definitely going to set her as Gail Kim‘s replacement as the top face of the company. Ayako is set to debut at the iMPACT tapings in two weeks. Ayako, age 28,Â has been wrestling for 11 years and some of her achievments include a two time World Heavyweight Champion for All Japan’s Women’s Pro Wrestling.

– UPDATE: WWE officials planted a rumor in the UK to a large number of media outlets that Stacy Keibler was dating Hornswoggle. It was believed WWE did this just to get attention for WrestleMania, but apparently the “real reason” was because Stacy refused to work the Divas Battle Royal. The story never got printed but media outlets were calling Stacy frequently to ask her about the story.

Well, there was your morning News Quickie! What do you think of the feature and the news? Sound offÂ in the comments!