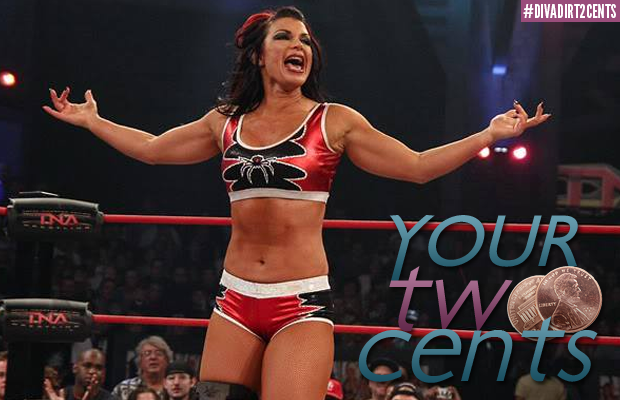 This week, we’re asking this: Tara‘s been released by TNA, so we want to know: what was your favorite moment in her TNA career? We’ve read your responses on our social media pages and picked some of the best submissions to highlight here on the website. As always, you can join the debate by leaving your comments!

* @AJandK2lover: When she turned on Brooke Tessmacher. [WATCH]

* Ashley Matthew: Her getting her tarantula back after the Knockouts Lockbox Challenge. I loved how happy she was to get Poison back, even though she sadly lost the Knockouts Championship due to it. [WATCH]

* @ChrisRiddle: Tara and Brooke having the first ever Knockouts singles match at Bound For Glory! [WATCH]

* @christopher_cc: When she beat Angelina Love for the Knockouts Championship. [WATCH]

* @Jaffney_Quinn: Her first Knockouts Title win. I don’t think that I will ever forget the raw emotion in that moment. [WATCH]

* Josue Guzman: Tara vs. Awesome Kong in a Steel Cage match! Tara being able to power bomb Kong shows how much athleticism is in her and that age hasn’t stopped her from giving her all when stepping in the ring! [WATCH]

* @miss_chrissi7: When she turned on Madison Rayne at Sacrifice 2011 to help Mickie James retain the Knockouts Title. [WATCH]

* @Strident78: So many to choose from… I’ll go with her record-equalling 5th Knockouts Championship victory. [WATCH]

* Wesley Stanton: Tara’s debut was epic to me, just loved how fierce and determined her presence was. Along with the backstage segment where Tara beats up the Beautiful People after being ambushed. [WATCH]

* @XbigvelvetfanX: When Tara and Angelina Love had their 2-3 month feud over the knockouts title. Classic.

What are your two cents on the debate? What was your favorite moment in Tara’s TNA career?