Your Two Cents: Who Should Join the Authority 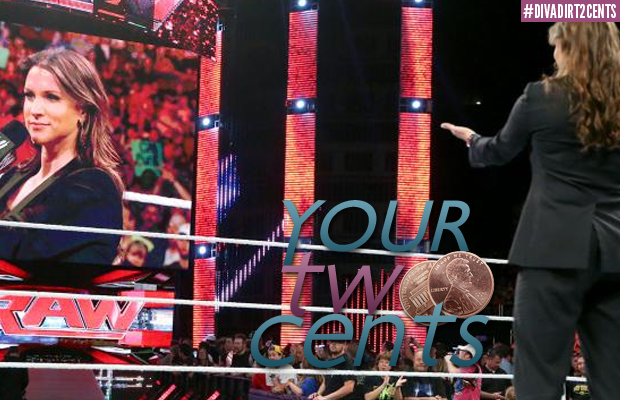 This week, we’re asking this: Which Diva(s) should align themselves with Stephanie McMahon and the Administration? We’ve read your responses on our social media pages and picked some of the best submissions to highlight here on the website. As always, you can join the debate by leaving your comments!

* @alex23contre: Maybe she can bring back the perfect combination of beauty & strength Beth Phoenix or the ever powerful Kharma.

* Alvie Gayagoy: Raquel Diaz…. Would be a great segway into a Stephanie/Vickie Guerrero leadership feud.

* Ashley Matthew: Honestly, I think they should bring in an NXT Diva. Maybe Sasha Banks?

* Brandon Jones: Alicia Fox. She should proclaim that she’s been under utilized for too damn long and use Steph’s power to give her the push she deserves!

* @ChickFightsRock: I think Natalya should,with the angle “You useless Divas don’t know what wrestling is.”

* @coleyhallWWE: I believe this would be the perfect angle for Summer Rae. She has tons of energy class and can hold her own.

* Francisco Mata: Natalya, I can’t vision anyone else but her! I can totally imagine her being the bitchy heel everyone hates, and she needs that ASAP as she’s slowly losing momentum, but definitely Natalya. I wonder why some months ago on SmackDown, Triple H called out Alicia Fox. could this mean something? Or was he punishing her for saying something she shouldn’t have said on live TV? I don’t know but it just wasn’t scripted at all. But Foxy would make a great choice too.

* @Jaffney_Quinn: I’d say Summer Rae or Tara. I’d like to see them bring a new Diva into the title picture to do to AJ Lee what they’re doing to Daniel Bryan. Summer with her NXT heel character would be a great kiss ass to Stephanie, and Tara would be a great powerhouse to bring back. Though I don’t want her treated like she was when she first left again.

* Josue Guzman: Honestly I don’t think Stephanie needs anyone to join her in the Administration Allegiance, she’s an extremely strong heel on her own. However I would like to see her continue to abuse her power more towards the Divas division. She’s already doing wonders with Brie Bella.

* @KevinGonzalez_: Bringing Kharma back would be perfect to reignite the feud between her and the Bellas.

* Lan Galvez: I think AJ Lee and Tamina Snuka (with their former alliance: Layla, Alicia Fox and Aksana. Plus! Rosa Mendes) They will be the girl version of Nexus and they will interfere and ruined everything especially the Total Divas!

* Randi Parker: I’m hoping for the Sister vs. Sister feud, Nikki Bella aligned with Stephanie because she is the girlfriend of the true face of the company John Cena, vs. Brie who is the soon-to-be wife of the anti-establishment guy is Bryan, I just really want to see Brie vs. Nikki!

* @Royal_TRP: I’d go with AJ and Tamina or Natalya, Stephanie could do the mic work, Tamina/Natalya could be the muscle of the three and AJ doing whatever to keep her title. They’ll do Stephanie’s dirty work within the Divas division, and Stephanie will ensure that AJ remains champion, then Stephanie and Tamina/Natalya will turn on AJ with the title on the line vs Tamina/Natalya.

* @SoRandy4Rosa: La freakin’ Costa Rican Rosa Mendes! She’s got the experience, the charisma and the shimmy!

What are your two cents on the debate? Who should join the Administration?