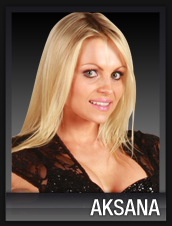 Renowned fitness model Zivile Radouniene has officially been added to the FCW roster, going under the name of Aksana. She is now listed on the company’s official website, you can see her profile picture to your left.

Radouniene signed a contract with developmental earlier this year, however news of her signing only became apparent to the wrestling press after first being covered here on Diva Dirt last month.

We have learned that Zivile was signed in the summer. John Laurinaitis, Vice President of Talent Relations in WWE, was reportedly familiar with her modelling work so that could explain how her signing came about.

Interesting to note, Zivile is 27 years old which is somewhat older compared to the women WWE have signed to developmental deals in the past, they tend to be in their early 20s.

They have also removed Alicia Fox‘s profile which suggests that she has officially graduated to the main roster. Savannah and Rosa Mendes, meanwhile remain listed.