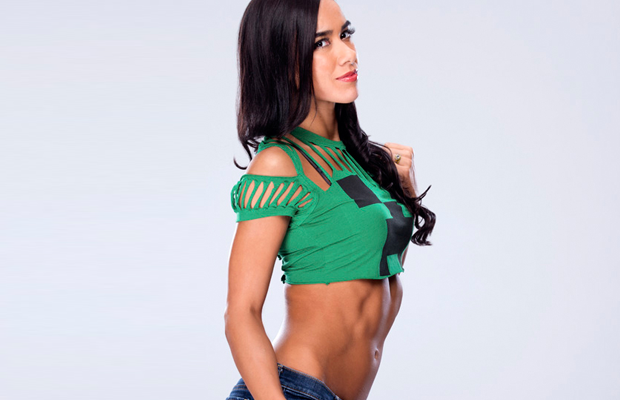 Divas Champion AJ Lee recently spoke to IGN to promote this Sunday’s Hell in a Cell Pay-Per-View, addressing the possibility of Divas competing inside the cell itself, feuding with Stephanie McMahon, Paige joining Total Divas and more.

Wrestling inside Hell in Cell: “Trust me, we were very vocal about wishing that was possible. And trying to make that happen. We really were. Especially Paige, because she’s down for any of that stuff. The really cool thing too was that we’ve been kind of smashing each other all over the place already. On the stage, and then she pushed me off the stage. And the announce table. The barricade. The post. Things that girls actually hadn’t done in so long. So we were surprised that we were trusted with that in the first place. It seems like they’d trust us to take it to the next level and we kind of wished we could.”

Paige joining Total Divas: “I feel bad though because I feel like people are mad at her, at Paige, for it I think. But they really shouldn’t be. I think she has her own style and she’s going to bring a different flavor to that show. So people should just be happy for her and glad that they can now see more of her life. As for me. No, I like having people know the AJ I play on TV, on RAW, and I go home and I get inside so no one talks to me [laughs].”

Feuding with Stephanie McMahon: “I think there’s no one who could match the promos we could put on together. I think that’s why people might be into it. Because it’d be two alpha females. And we do talk a big game. We’re good at that. As far as a match goes, that’s been done. So I don’t know how much we’d be into re-doing something. It’d have to be very different and very unique. It’d have to make its own mark on our industry and add to the history. But I think the girls [Steph and Brie] did such a good job that I wouldn’t want to mess with that. Because that was their own special moment that they had at SummerSlam. But I also think that getting into a war with her would be amazing. I think people are looking forward to that. And the tiny interactions that we have had, so far, have been some of the most fun I’ve ever had.”

You can read the full interview on IGN.

Do you think we’ll ever see a Divas Hell in a Cell match?