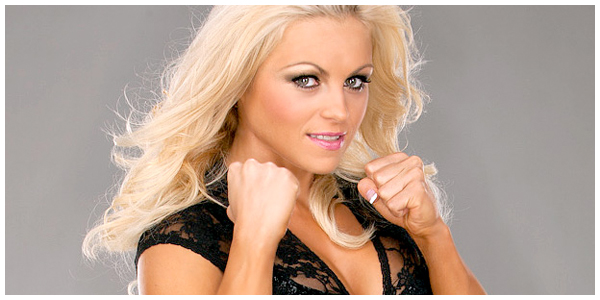 Say goodbye to the billion dollar baby from Lithuania.

Aksana, who was mentored by Goldust on the series, was eliminated tonight two weeks before the finale.

Aside from charming us with her hilarious broken English (“What is llama?”), Aksana’s highlights include marrying her NXT Pro Goldust in order to stay int the US. However, after the wedding Aksana made an apparent heel turn announcing she didn’t love Goldust and used him for a green card. Following her elimination tonight, Goldust served the Lithuanian beauty with divorce papers. Double ouch!

Aksana follows in the footsteps of previously eliminated contestants, Maxine and Jamie Keyes. Just three Rookie Divas (AJ, Kaitlyn and Naomi) are still in the running to become WWE’s next breakout Diva in two weeks time.

Was the right person cut? Sound off in the comments…