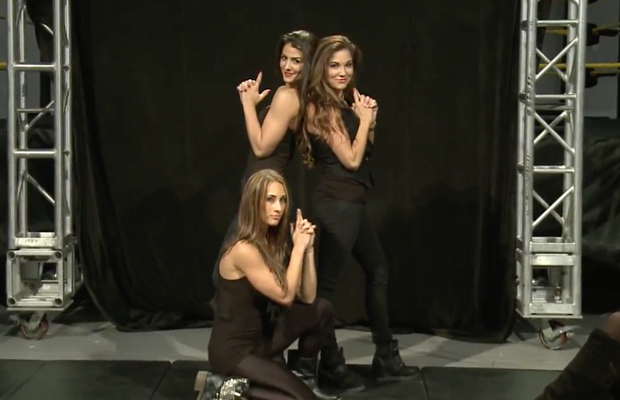 Divas were all over the leaked promos: new signees Ashley Sebera, Leah Van Damme and Sarah Backman get their first shot in front of the camera, while Bayley, Becky Lynch, Charlotte, Devin Taylor and Veronica Lane add some finesse to their characters.

Ashley appears in a vignette with Veronica Lane, playing a two-faced character that fools beauty queen Veronica into thinking she’s her lap dog.

Sarah introduces herself via promo, detailing her past as a champion arm wrestler and promising that she will be just as successful at wrestling. Sarah, who is Swedish, appears to be working to perfect her English.

Leah Van Damme, Devin Taylor and Veronica Lane team up to play “Vince’s Angels”, a babyface team of Divas who answer to Vince McMahon and are primed to take down the BFFs (Charlotte, Sasha Banks and Summer Rae).

Becky continues her limerick gimmick, cutting a standard “I’m better than the rest” promo, but rhyming the whole way through.

Charlotte shows up three times, first cutting a heel promo that addresses Stephanie McMahon. She claims that Stephanie should know that she’s “best for business”, having been born into stardom and being the best female athlete the WWE’s ever seen.

She also appears alongside Sawyer Fulton, dumping him and then trying to use him to get back her stolen purse. In the third promo, she is being accosted by Travis Tyler and Cal Bishop when suddenly a masked man (Sawyer) saves her. Charlotte, unaware that this is Sawyer, hits on him.

Leah shows off her physical comedy skills, pretending to sew threads into her lips and tug them in every direction, Charlie Chaplin style.

Bayley appears in a “confessional” style video, getting teary-eyed as she tells the camera how she wants to be the best, so that when she debuts, she gives aspiring Superstars and Divas the feeling she got watching Xavier Woods debut on Raw.

The videos will likely disappear soon, so find them and watch while you can!

Did you see the promos? Who impressed you the most?