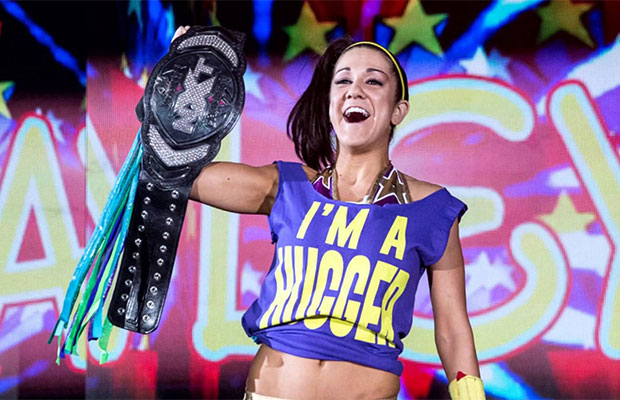 Former NXT Women’s Champion Bayley spoke with femalefirst.co.uk to promote the upcoming UK NXT Tour this summer. Here are some highlights of the conversation:

On her run as champion:

“The matches were incredible. The Ironman match with Sasha and everything was really cool, but I think just the fact I was able to carry the title and visit places for the first time being champion, like going to the UK for example, being champion. Not only with NXT but I also got to travel with WWE and, to be the NXT Women’s Champion and be on the WWE shows representing the company and the division in such a huge way was really cool for me. Going to places like Chicago and New York as the champion is what was really special for me. It was just being able to be the champion of such a great division and going to these places for the first time ever – it’s a huge honor.”

On WWE dropping the term “Diva”:

“I think maybe NXT had a huge part in it. I know a lot of the girls in the WWE always wanted to go down that path, but it wasn’t really until Stephanie McMahon introduced Becky, Sasha and Charlotte that people started noticing the movement and noticing that these girls want to be not just Divas, they want to take the division to a different level. I don’t think the fans really knew how bad everybody else wanted it backstage like Paige and the Bellas, and Nattie especially. They all wanted that for so long so for us to be able to kinda help and for Sasha, Becky and Charlotte to be the ones to kind of push it and for Stephanie to introduce them in such a big way. It’s been such a good year and it’s really cool to see that NXT kinda had a little help to do with that!”

On her dream main roster opponent:

“Nattie is one of them. I’ve had plenty of matches with her but I’ve only been able to team with her, I’ve never been able to have a match one-on-one against her. That’s one of the matches I’ve always wanted and she’s kind of been saying the same thing for a while since she was in NXT for a little bit. I remember watching one of her matches from the independents when she was like, an ECCW Canadian SuperGirls Champion against Ivory. One day I wanna have at least one match against her.

Nikki Bella as well, when she comes back from her surgery and everything. She’s the longest reigning Divas Champion, so I feel like she’s someone I can learn from. I know we would have a lot of fun in a match together.”

“I think she’s doing an amazing job, it’s been really cool to watch her grow because I was in FCW for her first match and NXT TV for her first match with her dad in her corner, so to see what happened last night and how far she’s come to be able to be like, ‘I don’t need you anymore’, and knowing she’s gonna be on her own now, I’m excited to see what her next move will be. I think she’s doing a really great job, she’s been put in this position to carry on her legacy and name, I know it’s so much pressure but she’s doing a great job. If I were to make it up to the main roster sometime soon I think she’d be a perfect person to target!”

On the next step for NXT touring:

“Man, I kinda wanna go everywhere! I would really like to go to Mexico. I’d one day like to go to Japan, one day go to Australia, but I think I really wanna go to Mexico. I kinda started watching wrestling through Lucha Libre because my grandmother was always watching Lucha Libre. I think it’d be so cool to bring NXT over there, I know how crazy and passionate those fans are. I don’t know if that’s ever been in the talks but I think that’d be really cool. And, just to have as a whole monthly pay-per-views and be able to take our pay-per-views like we did to London and like we just did to Dallas. I think it would be cool to be able to expand our pay-per-views and be able to do more stuff like we did in London, but everywhere.”

On the British talent going on the NXT tour:

“Yeah I’m really curious. I always tell people all the time in interviews that, there’s so many people in NXT here working at the performance centre and all around the Florida shows that nobody gets to see yet because they’re not on NXT TV yet, or they have one match here or there, so they can’t appreciate their abilities or anything about them. Hugo Knox is one of them, he’s been here maybe two years, and he’s been working really hard and he just has a cool charisma about him that we only get to see here in Florida shows. I’m really excited to see him be able to go home, I’m sure he’ll have friends and family there. I think Nikki Storm also, she’ll be around. She said she’ll be about three hours away from home and everything so it’s gonna be really cool to see.”

On wanting to do NXT TakeOver during the UK and Ireland tour:

“Yeah, I know we have one in June, so I wish we had one over there. I don’t know how hard it is to do or how much money goes into it and all this stuff, I’m just selfish and like, ‘Man why don’t we do it there?’, but I’m just excited we’ll be there for a whole week again.”

On a potential rematch against Asuka for the NXT Women’s title:

“I am not sure. I’m owed a rematch so I’m hoping there would be no cooler place to do it than on that UK tour, so we’re gonna have to see. I honestly don’t know what I’m doing on the tour yet but I’m just excited to be there, and I know Asuka will be there so we’ll have to see what happens!”

On the pressure of remaining as a role model for her fans:

“I wouldn’t say pressure, I think it’s really humbling that kids are so involved in my career and just watching kid’s faces, when I watch my matches back and see little kids jump around, it’s just insane. One of the coolest things is the parents that thank me or the parents of an eight-year-old girl who thank me for being a role model, then I’m like, ‘Oh my gosh I better not mess this up!’ I guess that’s where the pressure comes, it’s like, ‘Yeah, I’ll take care of them!’ I know how important wrestling was to me as a kid and how it sculpted the way I went for my dreams and things that I did in life, the way I dressed and the way I acted towards people and, it had a huge influence on me so, I always remember that and know that no matter what, even when I’m out of the ring I always have to present myself in a certain way. It’s kind of how I am already so it’s not like I have to put on a show for the kids or anything. It’s been really cool.”

The full interview can be read here.

What do you think about Bayley’s choices for her dream opponents? Do you want to see a rematch against Asuka? Let us know your views in the comments below!