Bellas on Freaking Out Hurricane, Hiding Under Ring, Winning Titles 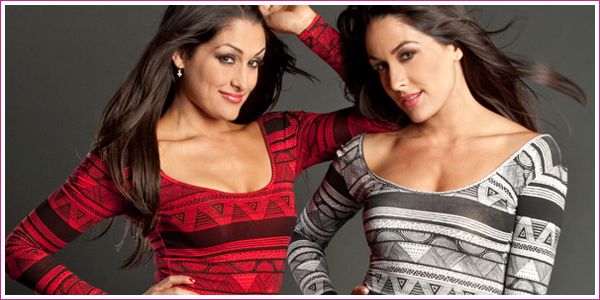 The Bella Twins are featured in the December issue of WWE Magazine and reveal how they freak out WWE Superstar, Hurricane Helms — seems the ECW superhero, unlike most men, has an aversion to twins. Read below:

The Hurricane recently told us that he’s terrified of identical twins, including you two. Were you aware of this?
Brie: When we first met him, he said, “No no no, I can’t talk to you two at the same time.” He told us about watching The Shining as a kid and being freaked out by ghost twins.
Nikki: So in the beginning, we were respectful and never approached him at the same time. But slowly, we’ve become friends with him, and if we’re not in our Bella clothes, he doesn’t mind sitting at the same dinner table with us.
Brie: But he still thinks I’m a clone. He says Nikki is the normal one and I’m not really human.

Do you abuse this power to creep him out?
Brie: You have no idea how much we bug him out. Anytime he gives us attitude, we pull a prank on him. We’ll dress alike and hold hands at the end of the hall, yelling his name. He totally freaks out, and his eyes look as though they’re about to pop out of his head.
Nikki: He always says, “Argh, I hate you guys!” and runs off. It’s so much fun!

The Bellas also discuss their early gimmick of one hiding under the ring:

When you two debuted, only Brie entered the ring. Nikki hid underneath. Describe Hornswoggle’s home for us.
Nikki: It’s so dark! And you have to lie down, but at least there are blankets to make it comfier. Sometimes I wished I could take a nap.
Brie: One time, I was underneath and the main event was Khali versus Big Show. Directly above me these giants were falling to the mat, and it was so loud that I was terrified. All the dust was flying around me. I felt caught in a thunderstorm.
Nikki: And it smells horrible under there when the pyro goes off. But hey, not all girls get to go underneath the ring and visit Hornswoggle!

And last but not least, competing for WWE gold:

What if you were both competing for the same Women’s or Divas Championship?
Brie: We’re definitely competitive, especially when it comes to the singles titles. You gotta do what you gotta do to win, and that’s our attitude. If it came down to competing for a title, we’d get down to business.
Nikki: I’ll be winning a title before her, though.
Brie: Ha. I always win.

Something tells me we won’t ever have to find out… For more of the interview, click here.