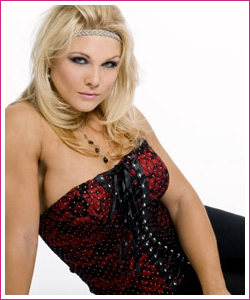 Mind… Gutter… Get it out. In the new issue of WWE Magazine, the Glamazon and former Women’s Champ, Beth Phoenix reveals that her ‘dream match’ would be against her SmackDown counterpart, Natalya. Comparisons between these two have passed for nearly a year now, from a similar build to their experience in the ring, Beth says:

My dream opponent: Natalya. I’ll never be able to wrestle Bret Hart, so being able to get in the ring with her would be as close as I could get to taking on the Hart Foundation. I’d love to have a ladies’ ladder match with her!

With Victoria now retired, I think this would be a dream match for many, in the same way Beth vs Victoria was. Natalya is my humble opinion, the most gifted Diva on the WWE roster right now and I have no doubt these two would tear the fricken’ house down. Nattie has a lot of untapped potential that I’m just dying to see come out; with both of these Divas as heels, who would play the face? I’ve always said that Natalya could easily transition to being a face, getting the fans behind her through her family lineage, no doubt WWE audiences even today love some Bret Hart. I definitely could see her becoming the top face Diva in WWE if they pulled at all the right strings, but it just doesn’t seem likely since she isn’t considered to have the ‘look’. Such a shame.