Beth’s Got the Right Idea 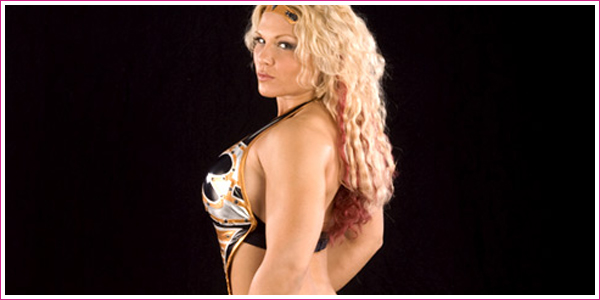 Women’s Champ and Slammy award winner, Beth Phoenix stopped by the Monday Night Mayhem radio show on yup, you guessed it, Monday night just hours before her big Slammy victory. It seems Beth, like the fans, is pushing for a match between herself and Melina at WrestleMania 25 next April.

Mosh then mentioned Melina’s recent return from injury, and dead stare on trying to win the Women’s Championship. He asked Beth if she would be interested in defending her title against her in Buffalo at Armageddon, and have the opportunity for some retribution. Beth said that Melina is one of the girls, like herself, that raised the bar for women’s competitors in wrestling, with the “spectacle” & “beauty” she brings to it. Beth said that she “wants to wrestle the best, so she can beat the best, so ‘The Glamazon’ can stay in the spotlight as the WWE Women’s Champion, because I deserve to be. So I would love to beat up Melina in my hometown….That would be awesome.”

In regards to which Diva currently in the WWE Beth would like to wrestle against at WrestleMania XXV, Beth said that her & Melina “still have a score to settle,” after once walking down the aisle as allies. Beth said that Melina has become “sick & twisted” over the past year, as Melina sat on the sidelines watching Beth’s success, and said it would be great to wrestle her at “The Showcase Of The Immortals.” She added that she would love to “set the record straight” though, and silence the critics once & for all in that Beth Phoenix is the dominant diva, not Trish Stratus.”

The fans want it, Beth wants it… make it happen WWE! It’s about time some real wrestling was reinstated to WrestleMania! I’m officially angling for Beth vs Melina for the Women’s Championship and because I’m slightly overzealous, Gail Kim vs Natalya for the Divas Championship!