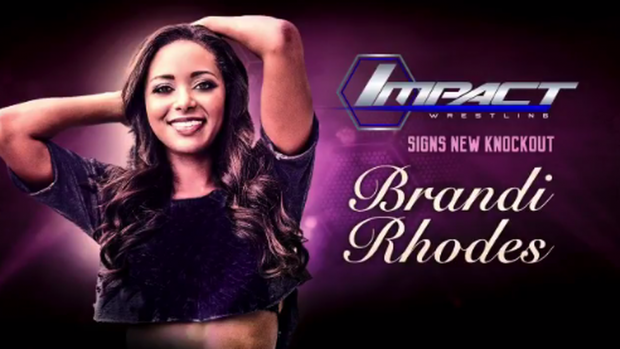 Just a few days after word got out that Brandi Rhodes had inked a new deal with TNA, things are now official: Brandi Rhodes will make her way to TNA as a competing Knockout!

The announcement was officially made via TNA’s Twitter account and included Brandi’s first TNA interview with Josh Matthews on what fans can expect from Brandi’s new endeavors. Below are a few highlights:

On transitioning from broadcasting to an in-ring competitor: “I’m so excited to finally be in battle. I have wanted to wrestle for some time and now that the opportunity has presented itself to be a part of the TNA Knockouts, I am just so excited. I can not wait to get out there with some of those great Knockouts and see what I can do.”

Thoughts on the TNA Knockouts division: “I have followed the Knockouts, quite a bit actually. The Knockouts have always stood out. Recently, more eyes are going towards women in wrestling but for the longest time TNA has put a big focus on the ladies and giving them a really strong chance to show what they can do and compete. Naturally I wanted to be part of the division.You’ve got strong ladies like Gail, obviously Gail is going to the Hall of Fame, that’s amazing and exciting. The chance to be able to get in the ring with someone like herself, Jade, Madison, Raquel, you guys have a very strong roster of women, so I’m really excited.”

On doubters who won’t take her seriously as an in-ring competitor: “I think there will two kinds of people. I think there will be people who are hopeful, hoping that I do well and hope that I show them a different side and that I succeed. Then I think there will be people who can’t get one thing out of their mind and unfortunately what they have in their mind is that I’m a broadcaster but before I was ever a broadcaster, I was a badass athlete. I was a figure skater for seventeen years, I skated alongside many of the olympic athletes that you know today. So I’m hoping that I can show that athletic side and anyone who is not confident in me, I hope to make them confident real soon”

Brandi also shared her excitement about joining the Knockouts division on Twitter:

Its official! The first lady to represent RHODES as an in-ring competitor. Thanks @IMPACTWRESTLING CANNOT WAIT! ?? https://t.co/WW12zcmQmB