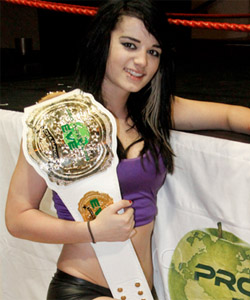 Britani, who is part of the Knight wrestling family which includes her mother Saraya, has been on WWE’s radar for quite some time, taking part in tryouts last year and this past April. We initially reported that Britani had signed with WWE earlier this year, but she denied reports at the time.

PWInsider reports that Britani will be finishing up her commitments at SHIMMER next weekend (October 1st and 2nd) and heading to Tampa, FL.

Earlier this year, Britani was crowned the first ever Pro-Wrestling: EVE Champion.

Good luck to Britani in WWE!

Watch our video interview with Britani at SHIMMER in April: